SINGAPORE - Action has been taken against at least 14 undergraduates from the National University of Singapore (NUS) for their role in inappropriate orientation activities, in July, The Straits Times has learnt.

It is understood that the students were involved in organising or facilitating orientation camps, including the Faculty of Arts and Social Sciences and the students' union.

The Straits Times understands that the undergraduates can appeal against the decisions.

When contacted, NUS declined to give details. A university spokesman told The Straits Times: "To safeguard the fairness of the proceedings and the privacy of all concerned, student disciplinary matters are internal to NUS."

In July, The New Paper reported on the risque orientation games that freshmen were asked to play, including one that simulated rape.

The report, which said the risque orientation games have been going on for years despite complaints to the university authorities, triggered a public outcry. 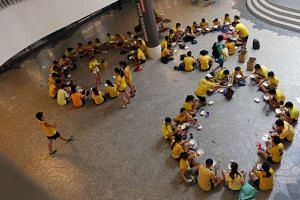 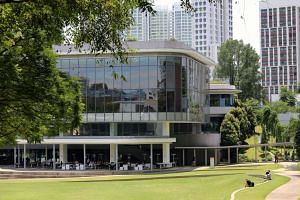 Acting Minister for Education (Higher Education and Skills) Ong Ye Kung called the inappropriate acts "reprehensible". But he also said the risque games were not widespread, and that there was a "fairly strong view" that orientation was useful for freshmen.

Student-organised orientation activities were suspended on July 29, except some such as the NUS Student Union's Rag and Flag activities. The suspension was gradually lifted from Aug 8.

According to sources, the university's investigation into the orientation activities began with fact-finding at the start of August.

Sources say orientation group leaders and student camp councillors were summoned to the session facilitated by staff from the university's Office of Student Affairs and the Office of the Provost.

Students were briefed on the need for integrity and told that what they said would be used as evidence in the investigations.

They were given questionnaires which asked about the sexualised games,whether the student did anything to stop it, and who led the activities.

Staff  then went through the questionnaires with each student individually.

The university found that some of the students contravened rules, which included using unapproved items during orientation activities, consumption of alcohol beyond university-designated premises and events, and providing false information during investigations.

Help from the NUS law faculty's pro-bono group, initiated by students, was offered to the undergraduates. This was to help them understand legal terms that were used in the disciplinary process.

Varsity students interviewed said that the punishment meted out was fair.

Final year environmental engineering student Zenn Lin, 24, said: "Not every faculty or camp organising committee member behaves in this manner. So this investigation is good as it helps to weed out the black sheep."

Second year political science student Isaac Neo, 22, thought that asking the students to perform community service was an appropriate form of punishment but added: "If I were in their shoes, I would feel angry and unfairly treated, because people have been doing these type of activities for years."

Sales account manager Alex Yeo, 48, whose daughter is a freshman, said the punishment will act as a deterrent and future camp organisers will think twice about asking freshmen to play risque games. "It also sends a message that the school is actually doing something about this," he added.

"The university must acknowledge a lack of supervision by the management. Right now, it is telling the public that it is entirely the fault of the students."

The university has convened a 14-member Orientation Review Committee to review and make recommendations to improve freshmen orientation.

Professor Tan Eng Chye, NUS' deputy president (Academic Affairs) and Provost, said that the committee has been asked to "consider new approaches to freshman orientation" and look at current practices that should be extended and preserved.

The university said on its website that the members comprise undergraduates, faculty staff and alumni.

The committee, which was set up in late August, is expected to submit its report to the university in mid-October.

Note: Our reporter had sent queries to NUS which declined to answer them. Instead the university asked that The Straits Times not run the story.  An NUS statement sent on Wednesday stating there were "factual inaccuracies" in our report made much of some minor aspects of the story. The substance of the story still stands.