The National University of Singapore (NUS) has suspended all freshmen orientation activities "with immediate effect" - an unprecedented move which has shocked freshmen and student organisers.

The decision was taken yesterday afternoon at an emergency meeting, after a video was posted online showing freshmen of both sexes being dunked repeatedly in a pond in Sheares Hall.

The incident on Wednesday came a day after the Office of Student Affairs (OSA) met student leaders to remind them on what constitutes unacceptable activities. This followed a New Paper report on increasingly sexualised games, some of which involved the simulation of rape scenes, at orientation camps.

"We are deeply disappointed that some of our students have flouted the rules and behaved in an unacceptable manner in organising freshmen activities," the OSA said in its statement yesterday. 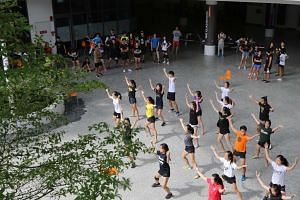 It added that those found responsible will be brought before the university's board of discipline.

The five-day Orientation Week, or O Week, had been scheduled to start on Monday. It is the final batch of orientation events before the start of learning, with each of the university's faculties holding their own camps for new undergraduates. The week culminates with the university's Rag and Flag Day - the NUS Students Union's annual charity fund-raising event.

Rag and Flag activities, which raise funds for 22 local charities, will still go ahead, but many students are disappointed by the suspension - especially after all the planning. "It would've been a good opportunity to get to know people from different majors," said Miss Rachel Chee, 19, a freshman who was going to attend the Faculty of Arts and Social Science's O Week.

Having attended another orientation camp earlier, she felt only the negative aspects have been played up. "Overall, it was still fun."

Another freshman, Miss Sabrina Tan, 19, said the orientation group she was assigned to was deflated. She added that they were told the $75 camp fee would be reimbursed.

A house head for one of the faculty camps, who did not want to be named, said planning for the camps had begun in January. "Sponsors had already been confirmed. Now the university is cancelling it just three days before the camp - it's really not fair."

Parents The Straits Times spoke to supported the suspension. "Every year, we see the same old thing," said Mr Alex Yeo, 48, whose daughter is entering university this year. The sales account manager said it was important to "get to the root of the problem". "After all, it is not good to completely remove orientation camps."