SINGAPORE (THE NEW PAPER) - One was asked whose bodily fluids she would like to drink, while another watched her peers re-enact an incestuous rape scene.

These were just two examples of the sexualised activities that hundreds of freshmen were made to participate in some of the National University of Singapore’s (NUS) orientation camps in the past two months.

Some students said they attended the camps to make friends, but they were instead pressured to take part in increasingly sexualised activities.

A 19-year-old freshman whom we shall name Chloe told The New Paper that she left the room after she became uncomfortable during an activity called “burning bridges” that required her to answer inappropriate questions.

The questions touched on taboo subjects such as which man’s bodily fluid she would want to drink, who among them is the sluttiest, and who would never get married and die alone, she said.

The girl had to lie on the floor, then the guy pretended to kick open a door and say, ‘Kor kor (big brother) coming.’ The girl had to respond, ‘Mei mei (little sister) don’t want.’ He then kicked open her legs and did push-ups while lying on top of her.
- Kim

“Every time I didn’t take part, I was so scared that the orientation group would write me off as a prude and ostracise me,” said Chloe, who requested not to be named for this reason.

She added that the camp’s cheering and chanting was also sexualised, with references to the male anatomy, that made her blush.

“(The cheers) were so senseless. I hated them, but apparently it’s tradition that has been passed down from previous batches,” she said.

This perhaps explains why there have been complaints over the past decade, mostly from women who feel sexualised or harassed by the chants and games, some of which involve close contact.

That they are still happening today despite the complaints, and the universities promising to investigate and take action against offenders, imply that nothing much has changed.

Another 19-year-old freshman, Kim (not her real name), told TNP that she was grabbed from multiple directions by different students during a game that involved soap and water.

“I didn’t even know where they were touching. It was so physical. I ended up in pain, and it was a scary experience,” she said.

One of the forfeits for a game required a male and female freshman to re-enact a rape scene between a young man and his younger sister, which was even uncomfortable to watch.

“The girl had to lie on the floor, then the guy pretended to kick open a door and say, ‘Kor kor (big brother) coming.’ The girl had to respond, ‘Mei mei (little sister) don’t want’,” Kim said.

“He then kicked open her legs and did push-ups while lying on top of her.

“The girl looked very uncomfortable and covered her face throughout the whole thing.”

The incident traumatised Kim, who said that she wanted to cry during many of the activities.

“Why in the world would they have such ideas? I wanted to get out so badly.

“A group of us girls wanted to leave, but the orientation group leader stopped us and told us to finish playing the game.”

The orientation group leaders are seniors in NUS, and the camp attended by Kim was organised by the NUS Students’ Union two weeks ago.

On its website, the union says that it “strives to work towards upholding its vision of being a representative, inclusive and credible institution to promote, safeguard and uphold students’ interest and welfare in NUS”.

TNP was alerted to the activities by a reader, who said in an e-mail that there were “incidents of sexual harassment” during the camps, as well as the “trivialisation of rape”.

The reader also cited the NUSWhispers Facebook page, which had posts about a cheer that “simulated a group of guys ejaculating on a girl’s face”.

Other participants of the camp that TNP spoke to confirmed this.

A spokesman for the Association of Women for Action and Research (Aware) labelled such activities “alienating rather than bonding”, and criminal lawyers said police reports should have been made.

TNP asked NUS why it had been unable to tackle the problem of inappropriate activities during such camps despite numerous complaints over the past decade. 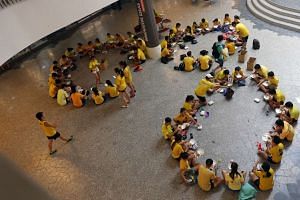 An NUS spokesman did not address the question, but instead said that it is currently looking into the issue.

“At NUS, orientation activities serve to welcome freshmen and integrate them into the university community and campus life,” said the spokesman.

“Participation in orientation camps and activities is voluntary. Our student leaders are constantly reminded to develop meaningful orientation activities that will help forge new friendships among our freshmen.

“Student organisers of orientation camps are also thoroughly briefed on the guidelines for orientation activities.

“The NUS Office of Student Affairs (OSA) has recently received feedback in relation to some inappropriate orientation activities.

“It is currently looking into the feedback and working with the faculty concerned. Freshmen are also advised to report inappropriate orientation activities to OSA, so that the office could look into their concerns.

“The University takes violations of the Student Code of Conduct very seriously. Disciplinary action will be taken against students who breach these guidelines.”

But the students TNP spoke to said the damage had been done.

Kim said: “All I wanted was to make new friends. I wonder why we even have such activities?

“But the camp is over, and we cannot do anything about it.”

Orientation games at local universities have courted controversy for a decade, but the replies to the media have been similar each time.

The activities have also become raunchier, with this year’s games at the National University of Singapore (NUS) being the most lewd and explicit.

In 2006, The Straits Times (ST) reported that activities involving lip contact and the washing of armpits at the Nanyang Technological University (NTU) and the NUS orientation games left students flustered.

This was followed by a similar report in 2008, in which ST quoted an NUS student who sat out an activity where male students did push-ups on top of female students.

In 2011, The New Paper reported that a girl cried after orientation games at the Singapore Institute of Management-University of London became too close for comfort.

The activities were similar to those at NUS in 2008, with male students leaning over female students on the ground.

In 2014, NUS was again in the spotlight after complaints that a male student was stripped to his shorts before being blindfolded and bound with tape, as female students licked whipped cream off his neck.

Each time, the replies from the universities to queries follow a similar pattern.

The universities would highlight the guidelines in place and that they do not condone such behaviour. They would then promise to investigate and take action against anyone who breaches the rules.

They also mention that participation in the camps is voluntary. But freshmen say they feel pressured to take part for fear of being ostracised.

In recent years, the institutions have implemented channels for feedback.

Yet, a decade on, nothing has changed.

Lawyers: Such activities could be against the law

Ms Jolene Tan, 33, programmes and communications senior manager for the Association of Women for Action and Research (Aware), said such activities are uncalled for, and that more should be done to protect the students.

“Such activities are very inappropriate, and promote bullying, the objectification of women, and is an unhealthy trivialisation of sexual violence,” she told The New Paper.

“They are alienating rather than bonding, and potentially traumatising to anyone there who has experienced sexual assault previously.”

She added that new students feel pressured to take part or be left out, resulting in many choosing not to voice their discomfort.

“Even if they are uncomfortable, they won’t say it because they don’t want to be a spoilsport.

“The whole culture needs to change. There needs to be a policy in institutions that is explicit about harassment.”

A survey of 500 young people aged 17 to 25 conducted by Aware in 2014 found that one in three had experienced sexual assault or harassment, said Ms Tan.

Lawyers told TNP that such activities outrage the modesty of women, and police reports should be made by individuals who feel violated.

Criminal lawyer Ravinderpal Singh of Kalco Law said such activities could easily be considered to be a violation of the Penal Code, which criminalises any word or gesture intended to insult the modesty of a woman.

“If the woman takes offence and feels outraged, she can make a police report,” he said.

“The school can also be liable if it is negligent, and fails to provide a safe environment.”

He added that the school has a duty to ensure the well-being of all students.

“You cannot evade liability even (if students sign) a form,” he said.

“There definitely should be checks done by the school to ensure that such things do not happen.”

Another criminal lawyer, Mr T.M. Sinnadurai of Regent Law, said: “The words they used are gross and could be considered offensive. In my opinion, it is wrong.

“Even if there is no physical touching, it is still a violation.”

The father of a 20-year-old girl said that if his daughter were placed in a similar situation, he would immediately make a police report.

“I would be outraged if someone did something like that to my daughter,” he said.

“No one should be forced or pressured into such activities, and a police report should be made.

“A school is a place where you have to learn to get your morals right. If the school teaches these things, then it is the wrong place to start your learning.”