SINGAPORE - She received a call from what appeared to be her bank. So when she was asked to provide her one-time password (OTP) to "authenticate" her account, she did not suspect anything.

But when she realised she had been scammed, it was too late - unauthorised transactions had already been made.

Using the example above, the police on Thursday (Feb 21) warned of a new scam targeting bank customers here.

Police advised members of the public to be wary of unsolicited calls from such individuals, noting that scammers can use technology to mask their actual phone number and display the bank's instead.

It also advised against disclosing personal details such as OTPs or account username and passwords to anyone over phone, e-mail or texts.

"If you receive a suspicious call purportedly from your bank, hang up and call the hotline published on the bank's website to verify the authenticity of the request," the police said, adding that one should not call the number provided by the suspicious caller. 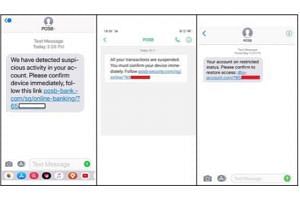 Is the SG Bonus SMS real? MOF shares tips on how to identify legitimate messages

In the past, scammers often attempted to trick bank customers via SMS.

Last month, The Straits Times said there had been a resurgence of phishing SMSes targeting DBS and POSB customers, with more than 90 reports since September last year.

Apart from banks, the Ministry of Finance warned in October last year of fake SMSes on the SG Bonus purportedly sent by the Government.

The public can call the anti-scam helpline on 1800-722-6688 or visit www.scamalert.sg for scam-related advice.