SINGAPORE - Free Singapore Airlines (SIA) tickets from clicking on a link? Probably too good to be true.

SIA warned customers in a Sunday (Jan 13) Facebook post that a website masquerading as its own was offering free tickets as prizes before asking for personal data.

The airline has since reported the site and asked for it to be taken down.

"We… would like to advise customers to exercise discretion when revealing personal data to unverified sources," SIA said in its post.

In a screenshot circulating on social media, a WhatsApp message reads: "Singapore Airlines is giving away Free tickets to celebrate its 70th Anniversary. Get your free tickets at: http://www.singaporeair.com-ticketsfree.win."

An SIA spokesman said the airline is currently working with its security vendor to have the phishing site taken down.

SIA advised its customers to be cautious of social media posts and phishing websites that appear similar to its official website, singaporeair.com. 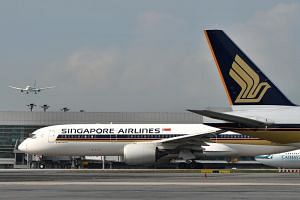 Members of the public who wish to verify if a website, e-mail or call is legitimately linked to SIA can contact it through its social media channels or at http://singaporeair.com/en_UK/feedback-enquiry/

This is the latest of many scams that have dogged the national carrier.

Last June, ST reported that a fake website had sought to mislead users into thinking SIA was offering tickets at only $1 to celebrate its 45th anniversary.

In March the same year, SIA similarly warned its customers of scams being circulated through e-mail and calls.

Apart from SIA, ST reported on Saturday that scammers were impersonating the Singapore Police Force, with fake websites to phish for personal details.

More information on scams can be found at www.scamalert.sg