SINGAPORE - Four customer service associates who allegedly accepted bribes in exchange for under-reporting the weight of passengers' baggage on Scoot Tigerair flights were each charged with one count of corruption on Wednesday (April 10).

Court documents did not state where the men purportedly committed the offences but they are said to have accepted cigarettes and cash as bribes.

Two of them, Mohammad Haris Mohammad Ali, 23, and Gerizim Kirubai Raj Deved, 35, both Singaporeans, were working for Sats Asia Pacific Star at the time.

Haris allegedly accepted at least six packets of Winston cigarettes worth about $66 from a man known only as Ahmad between April and May last year.

Gerizim is accused of accepting bribes between January and July last year. He is said to have accepted at least $630 from one Gajendran Ramesh. Court documents did not give details about Mr Gajendran.

The two men have since been sacked by the firm, which provides ground-handling as well as in-flight catering services to low-cost carriers in Singapore. It is a wholly-owned subsidiary of ground-handling firm Sats.

Between April and May last year, Ayyadurai, a Singapore permanent resident, allegedly accepted at least $500 in bribes from one Saravanan Muthuraja. Mr Saravanan's details were not revealed in court documents.

As for Patel, he is said to have received at least $800 from Gopal Krishna Raju, also an Indian national, between January and October 2016. 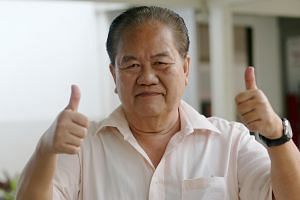 Gopal, 37, was also charged in court on Wednesday with giving bribes.

All the men except for Haris have indicated that they intend to plead guilty later this month. Haris' pre-trial conference will be held on May 9.

Responding to queries from The Straits Times, Sats said that Haris and Gerizim were immediately sacked last July when investigations started.

"We have zero tolerance for any breach of conduct... We have increased our CCTV surveillance and are working closely with the airport authorities to enhance anti-touting measures," it said.

In a statement, the Corrupt Practices Investigation Bureau said: "Corrupt practices of such nature will not only tarnish the excellent reputation of Singapore's Changi Airport but more importantly, it may undermine our safety in air travel."

Offenders convicted of corruption can be jailed for up to five years and fined up to $100,000.