SINGAPORE - Feeling aggrieved at his company for not helping to ease his workload, a baggage handler at Changi Airport Terminal 2 decided to swop the baggage tags of 286 bags belonging to Singapore Airlines and SilkAir passengers.

The bags later arrived at places other than their intended destinations.

As a result, the two carriers had to make compensation payouts totalling more than $42,000 to 221 affected passengers as of Oct 1 this year.

In what is believed to be the first case of its kind, Tay Boon Keh, who is no longer working as a baggage handler, pleaded guilty in court to 20 counts of mischief on his 65th birthday on Friday (Oct 26).

Another 266 similar charges will be considered during sentencing.

The court heard that Tay had been employed by industrial equipment supplier Lian Cheng Contracting, a subcontractor of the Changi Airport Group.

He started work on Sept 7, 2016, and was deployed to the Explosives Detection System (EDS) X-Ray machine at Belt 5-7 later that month. 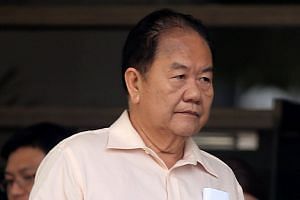 When this happened, Tay had to carry travellers' bags off Belt 5-7 and move them for screening at another machine at Belt 7-5 about 6m away.

Tay complained to his supervisor that it was physically tiring to carry the bags around.

However, as manpower at Lian Cheng Contracting was limited at that time, additional staff were not deployed to the EDS X-Ray machine at Belt 5-7, the court heard.

DPP Thiam told District Judge Jasvender Kaur: "Finally, out of frustration and anger at Lian Cheng, the accused came up with a plan to swop the baggage tags attached to the luggage bags that he handled with other baggage tags. The accused was alone when he performed the swopping of the tags, and he did it at an area which was out of CCTV view."

The DPP said Tay knew that by swopping the baggage tags, the affected bags would be sent to the wrong locations.

She added: "Nevertheless, the accused persisted in committing the acts intending to bring about inconvenience to his employer, Lian Cheng, and make Changi Airport Group aware of the manpower shortage and X-Ray machine breakdown issues, so that it could do something to rectify the situation."

His offences came to light after an employee from ground handling company Sats received e-mails from Singapore Airlines and SilkAir representatives, stating that some of their passengers' baggage tags had been tampered with.

DPP Thiam said Tay eventually stopped swopping travellers' baggage tags in February last year as his actions had not resulted in additional manpower being deployed to assist him.

Defence lawyers Senior Counsel Lok Vi Ming and Tang Jin Sheng are representing him pro bono and the case has been adjourned for a pre-trial conference on Nov 1.

The Straits Times contacted Lian Cheng Contracting on Friday and was told that it "cannot reveal anything" about the case.

For each count of mischief, offenders can be jailed for up to a year and fined.

A spokesman for the Changi Airport Group said Tay no longer worked at the airport, and added: “While this was an isolated case of mischief, we have enhanced access control as well as CCTV coverage in the baggage handling area. Patrols have also been stepped up.”