SINGAPORE - Just four months after she was sentenced to jail for assault, Ferrari driver Shi Ka Yee, 73, admitted in a district court on Monday (July 16) that she stopped her car in the middle of Orchard Road in 2016, causing a traffic jam.

She blocked the traffic after a private bus driver sounded his horn as she had been driving at a "very slow speed".

Shi pleaded guilty in court to obstructing other motorists when she stopped her Ferrari in Orchard Road, just after the Claymore Road junction near Orchard Towers, during the evening peak hour of June 29, 2016.

One count of verbally insulting the bus driver, Mr Wu Xiaokui, 41, will be considered during sentencing.

At 5.20pm that day, Mr Wu, who is a Singapore permanent resident, was transporting about 20 passengers from Scotts Road to Depot Road when he drove directly behind Shi's car in Claymore Road.

Deputy Public Prosecutor Wong Kok Weng said Shi's car was travelling at a very slow speed even though the traffic in front of her was clear.

As a result, Mr Wu's bus had to travel at a speed of 5kmh. He tapped his horn twice to alert Shi, and her car turned left into Orchard Road when it reached the junction.

The Ferrari suddenly came to a complete halt in the middle of the five-lane Orchard Road, occupying the third and fourth lanes from the right.

It obstructed Mr Wu's bus, which was unable to complete the turn or move forward. As a result, the bus got stuck across the third, fourth and fifth lanes from the right.

DPP Wong said there was no obstruction in front of Shi's car and she had no reason to stop the vehicle in the middle of the road.

The bus driver then asked Shi to move her car to the side of the road but she refused to budge. A long traffic jam had started building up by then, the court heard.

Police received a phone call about the dispute at 5.38pm and officers in a patrol car reached the vicinity two minutes later.

When officers asked her to move, Shi replied that she did not want the bus to get away as she wanted to report Mr Wu's behaviour. 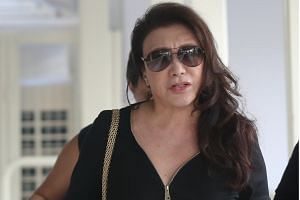 DPP Wong said that Shi later complied and drove away.

Besides this case, Shi was sentenced to four weeks' jail and disqualified from driving all classes of vehicles for six months in March this year. This was for assaulting BMW driver Raphael Chong Yen Ping, then 39, in Telok Ayer Street at around 5pm on Feb 25, 2014.

Shi will be appealing against this conviction and sentence.

She also has six other pending charges against her involving separate incidents.

For instance, in February 2015, she allegedly harassed her neighbour, Mr Nasrat Lucas Muzayyin, by using abusive words on him in Astrid Hill near Holland Road before trespassing onto his property. She is also accused of drink driving last year.

Shi, who is now represented by a legal team led by Senior Counsel N. Sreenivasan, is out on bail. The pre-trial conference for her cases will be held on July 26 for her to decide on the next steps she would like to take for these pending charges.