SINGAPORE - Ferrari driver Shi Ka Yee, 72, was on Friday (March 16) sentenced to four weeks' jail and disqualified from driving all classes of vehicles for six months, for assaulting a fellow motorist.

He found her guilty of punching Mr Raphael Chong Yen Ping, then 39, in Telok Ayer Street at around 5pm on Feb 25, 2014. Mr Chong suffered a cut above his right eyebrow from the assault.

In delivering his verdict, Judge Chay noted that Shi testified during the trial that she had slapped - not punched - Mr Chong. Shi claimed she did so as he had abused her with vulgar language.

However, the judge rejected Shi's testimony, adding that "no profanities were uttered" by Mr Chong.

Shi will be appealing against her conviction and sentence. Bail was offered at $16,000.

Deputy Public Prosecutor Zhuo Wenzhao said Mr Chong was in his BMW in Telok Ayer Street when Shi pulled up beside him and sounded her horn.

Elderly Ferrari driver's depression not a contributing factor to her committing assault: Judge 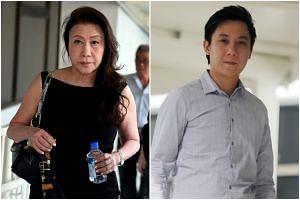 DPP Zhuo said: "The accused wanted the victim to move his car so that she could pass. However, the victim felt that there was enough space... as many vehicles had passed by his car in the five to 10 minutes he had parked his car.

"The victim rejected the accused's request for him to move his car. He also told her: 'If you don't know how to drive a Ferrari, don't drive a Ferrari'."

Shi then got out of her red Ferrari to take pictures of Mr Chong's car before punching him.

On Friday, DPP Zhuo said Shi was unremorseful and urged Judge Chay to jail her for at least four weeks. Referring to the case as a “classic road rage incident”, he also asked the court to disqualify her from driving for six months.

Defence lawyer Irving Choh pleaded for his client to be fined between $4,000 and $5,000. He told the judge that Mr Chong’s remark about Shi’s driving ability led her to commit the offence.

Mr Choh said: “Had Mr Chong moved his car... nothing would have happened... Thank goodness the injury was minor.”

Besides this case, Shi appeared in court earlier this month to face two new charges. These include one count of drink driving allegedly committed in February last year.

For these two new cases, she will be back in court on April 4.

Shi also has six other older charges against her involving two separate incidents. For instance, in February 2015, she allegedly harassed her neighbour Nasrat Lucas Muzayyin by using abusive words on him in Astrid Hill near Holland Road before trespassing onto his property.

In 2016, Shi allegedly stopped her car while driving in Orchard Road, causing an obstruction. She is also accused of harassing Mr Wu Xiaokui by using insulting words on him.

The pre-trial conference for these six older charges will take place on April 11.