He will serve the term after completing his earlier sentence of three years and four months in jail for his role in the misuse of church funds.

Chew, 58, was convicted last month of attempting to leave Singapore illegally from an unauthorised point of departure.

District Judge Victor Yeo also found him guilty of attempting to defeat the course of justice by boarding a motorised boat at Pulau Ubin jetty on Feb 21 last year to try to avoid his earlier jail sentence. Chew committed the offences a day before he was to begin serving the jail term.

He was caught at sea to the north-east of Pulau Ubin, close to the boundary between Singapore and Malaysian waters.

The court heard that this was the first case in which an individual was charged under Section 204A of the Penal Code over an attempt to avoid serving a jail term.

According to the online statutes, Section 204A involves parties "obstructing, preventing, perverting or defeating (the) course of justice".

Yesterday, the judge said: "The accused had explored various avenues to leave Singapore since October 2017, and his attempt to leave Singapore illegally on that day in question was thwarted by the vigilance of the Police Coast Guard.

"Any sentence imposed by the court for this charge must serve as a sufficient deterrent to like-minded offenders who would have no qualms to attempt to defeat the course of justice by avoiding serving their sentences." 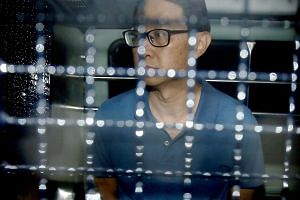 During the trial, Deputy Public Prosecutors Christopher Ong and Eugene Sng stated that Chew had admitted he wanted to leave Singapore as he "felt injustice for (his) High Court case".

Yesterday, DPP Ong urged the judge to sentence Chew to 15 months in jail. But defence lawyer Adrian Wee pleaded for him to be jailed for six months. He also said that the former church leader was remorseful.

In his grounds of decision, Judge Yeo said: "I was not entirely convinced of his remorsefulness, given that the accused remains adamant that his actions were only 'morally and ethically wrong'."

In March last year, Chew started serving his sentence for the misuse of church funds. Five other CHC leaders who were also convicted of misusing the funds - including founder-pastor Kong Hee - had begun serving their terms in April 2017.