Chew, 57, was due to begin his jail term of three years and four months from Thursday for his role in the largest case of misuse of charitable funds in Singapore's history.

Chew was arrested along with another man, 53-year-old Tan Poh Teck, at 8.47am on board a motorised sampan, said the police at a briefing on Wednesday afternoon at the Loyang Police Coast Guard Base, giving details of the arrest. Tan was piloting the sampan.

The Straits Times understands that preliminary investigations revealed that, when questioned, Chew and Tan claimed that they had been fishing.

But based on information received earlier, the police established that the two men were trying to leave Singapore illegally from Pulau Ubin to Malaysia. They were also not doing anything on the boat to indicate they were fishing.

Chew, who is married with two children aged 17 and 27, was found with about $5,000 in cash and fishing equipment.

Both men were arrested for “Attempting to leave Singapore unlawfully at Unauthorised Point of Departure” under the Immigration Act (Chapter 133).

Those found guilty of this offence could face a maximum fine of $2,000 or a maximum jail term of six months, or both.

At about 3.40pm on Wednesday, the police also arrested a Chew Eng Soon, 61, for abetting the offence. Those convicted of abetting an offence can face a maximum fine of $6,000 and a maximum jail term of two years.

The Straits Times understands that the two Chews are brothers.

Jetty where Chew Eng Han was picked up, on Pulau Ubin

At Chew Eng Han's condominium home located in Upper East Coast, his wife told The Straits Times that she didn't know what had happened and that the police had not contacted her yet.

They were intercepted about 2.4km eastwards from the Pulau Ubin main jetty – where Chew had boarded the boat.

ST understands that Chew had travelled to Pulau Ubin on his own before meeting with the sampan operator at the jetty. The operator does not ply the route between mainland Singapore and the Ubin island regularly.

SAC Hsu described the arrest "as yet another testament and commitment to PCG's mission, which is to prevent, deter and detect crime in the Singapore waters".

He added that the PCG would continue to safeguard Singapore waters and sea borders against crime and security threats, including unauthorised entry into and departure from Singapore.

Chew is being held in lock-up at the Police Cantonment Complex and will be charged on Thursday morning along with the boatman Tan.

While CHC founder Kong Hee and four other former leaders started their sentences in April after the High Court cut their jail terms for misusing millions in church funds, Chew has been on bail as he sought multiple deferments pending the Court of Appeal's final decision.

Even after his jail term - which was reduced from six years - was upheld by the Court of Appeal on Feb 1, he asked to defer the start of his sentence till after the Chinese New Year.

He was ordered to surrender to the State Courts on Thursday (Feb 22).

Unlike in the United States and Britain, the act of absconding is not a separate criminal offence in Singapore, say lawyers.

However, when an accused person jumps bail, the bail money will be usually forfeited unless the bailor is able to convince the court otherwise.

It is unclear how much bail Chew posted but Chew and four other CHC leaders - except for Kong - were on bail ranging from $750,000 to $1 million.

Chew was previously the church board's vice-president and treasurer.

He served on the finance committee from 2006 to 2007, and is one of two principal shareholders of investment firm Amac Capital Partners. He left the board after Amac was appointed as the church's fund manager.

He was also a director of music production company Xtron Productions from 2003 to 2004. 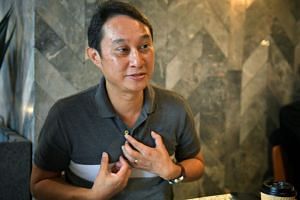 The six CHC leaders had channelled $24 million from the church's building fund into Xtron and glass maker Firna in the form of sham bonds, to fund the popstar career of Kong's wife, Ms Ho Yeow Sun, in a church mission known as the Crossover Project. They then misused a further $26 million to cover up the misdeed.

Chew was a church member since 1995 and cut all ties with the church in 2013, later telling the court that one reason for his parting ways was that Kong "deceived the people closest to (him)".

The church filed a civil suit against Amac and Chew for almost $21 million in unreturned investments. Chew is no longer contesting the suit.

When he took the stand during the long-running trial in 2015, Chew, who conducted his own defence, said he was responsible for the structuring of the financial instrument but not the usage of the proceeds.

He told the court that if any funds had been misused as alleged, the blame lay with other church leaders who had discretion over how the money was spent.

He cited e-mails and mobile text messages to establish that Kong, deputy senior pastor Tan Ye Peng, and former finance manager Serina Wee were the key decision makers of the allocation of money.

Chew also told the court that he and his family had donated $1 million to the church.

"I'm not a taker to the church. I'm a giver, and thieves don't give to the owners of the property," he had said.