SINGAPORE - A friend of one of the five victims in Saturday's horrific crash at Tanjong Pagar Road said a woman tried to save one of them and got burned doing so.

On Saturday (Feb 13) morning, five people were killed and one sent to Singapore General Hospital (SGH) after a car, a BMW, slammed into the front of a shophouse there.

Preliminary investigations revealed the car was driven by a 29-year-old man with four male passengers, in their 20s on board.

The 26-year-old woman, who is believed to be known to the driver, had tried to help the men after the accident, he said.

But she suffered severe burns and was conscious when taken to SGH, where is now in a critical condition in the intensive care unit.

The driver and the passengers were pronounced dead at the scene by a paramedic.

The Singapore Civil Defence Force was alerted at about 5.40am.

Mr Akira Chan, 21, a friend of the victims, told The Straits Times the victims were initially at a popular Korean eatery in the area.

He said: "They were at the restaurant around the time and were going back when the car skidded.

"The fiancée of one of my friends in the car tried to open the door to save him and was burned as a result."

ST understands she suffered 80 per cent burns to her body.

Mr Chan, who spoke to ST at the accident scene, said his other friends who were at the restaurant at the time witnessed the accident and were assisting in police investigations.

The family members of the victims arrived at about 10.30am, and were believed to have identified the bodies before they were taken away to the mortuary.

They were heard wailing from about 30m away, across the road from the site of the crash.

They left the scene at about 11.30am and declined to speak to reporters.

A young woman among the group was seen breaking down by the side of the road, and the other family members appeared distraught. 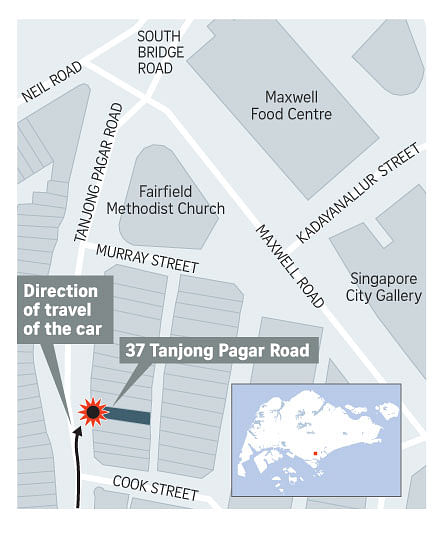 Two tow trucks were also at the accident site.

The five bodies were taken to the mortuary in two police hearses.

5 killed in Tanjong Pagar crash: 29-year-old driver believed to have sped before crashing into shophouse