To this end, China can work with other countries to launch more projects in third-party markets, he added.

Mr Heng, who is also Finance Minister, was speaking at a Singapore-China Business Association event at Shangri-La Hotel on Friday (May 17), ahead of his trip to China next week.

Casting an eye on current geopolitical developments, he said the global economy is forecast to slow down, with the continuing trade war between the United States and China rattling markets and the path to Brexit still unclear.

But the economy remains strong in Asia, he noted, adding that Asean is expected to become the fourth-largest economy in the world by 2030.

Against this backdrop, the BRI presents opportunities for cooperation and mutual benefit, said Mr Heng.

Besides developing physical infrastructure to better connect China with the world, China can work with other countries on new areas of cooperation under the initiative, he added. 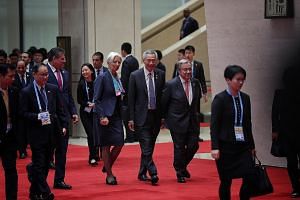 The road ahead for China's BRI partners

He reiterated a suggestion made by Prime Minister Lee Hsien Loong at the second Belt and Road forum in April, for China to explore third-country investments.

The Singapore-China Business Association can play a part in this aspect, by encouraging cooperation between Singapore and Chinese companies in other markets, Mr Heng said.

He added that Singapore can provide a platform for Chinese companies to expand overseas.

At the same time, Chinese companies based in Singapore can help local companies enter the Chinese market.

Reaffirming the longstanding ties between Singapore and China, Mr Heng said he believes economic and trade cooperation between both countries will grow.