SINGAPORE - Singaporeans need to be vigilant about foreign interference as it could endanger national sovereignty, said former minister S. Jayakumar on Wednesday (Sept 25) at a session of The Straits Times Book Club at the National Library.

The former deputy prime minister and foreign minister said that the power of social media has greatly magnified and complicated the problem.

"Foreign interference through this insidious way can influence large segments of our population to support or oppose a particular policy or candidate without really knowing they've been influenced by foreign manipulation."

That same morning, Home Affairs and Law Minister K. Shanmugam had remarked at a conference that Singapore needs laws to counter such attempts. Professor Jayakumar called this "timely".

"In the olden days, when a country wanted to interfere with or influence the course of events or just eavesdrop, they would usually do it through human resources - send a spy, plant a mole or an agent of influence, like the recent case of a professor at the Lee Kuan Yew School of Public Policy," he said, referring to Dr Huang Jing, who was expelled in 2017.

"But today, with technology and the manipulation of social media, you don't physically have to send spies and plant moles... The use of fictitious Facebook (accounts) was a critical factor in the last (United States) presidential elections."

"Can it happen here? Of course it can, through the skilful use of technology and media," he added.

It was standing room only at the session, which more than 300 people attended to hear Prof Jayakumar discuss his book, Diplomacy: A Singapore Experience, with ST news editor Zakir Hussain. 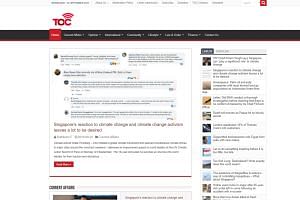 Experts look at measures to fend off foreign interference

The book, which gives insights into Prof Jayakumar's years in foreign diplomacy, was first published in 2011 and reissued this month with updates.

Prof Jayakumar, who also served as Permanent Representative to the United Nations (UN), spoke on a wide range of topics, from the transboundary haze to the 2016 seizure of the Singapore Armed Forces' Terrex armoured vehicles by Hong Kong Customs.

He said that despite its small size, Singapore has been able to make an impact on the world stage through diplomacy and mediation. For example at the UN, it played a key role in negotiations to shape the UN Convention on the Law of the Sea. It also established the Forum of Small States, an informal alliance of small countries with populations below 10 million, and was involved in convening the Global Governance Group (3G), which seeks to ensure the Group of 20 reflects the views of the wider UN membership.

Said Prof Jayakumar: "If we can succeed in quietly playing this role over a period of years, people will recognise that they can rely on Singapore to play this role and sometimes they are happier to have a small country rather than one of the big fellows in the chair."

Being pressured to take sides by bigger countries will always be a challenge, he noted, adding that it has become especially daunting of late, given the rivalry between China and the United States.

He has set out in his book several cases in which either of these powers was not happy with Singapore. "However, bilateral relations between two countries are not based on isolated incidents. Each side will weigh and assess the overall relationship."

A small country must be prepared to stand its ground as a matter of principle, he stressed. "If Country A pressures you and you give in, then Country B and Country C will pressure you too. Then you are making foreign policy on an ad hoc basis - no consistency, no principles, no fundamentals."

"If, as a small country, you accept your fate and kowtow in spite of your national interests, then you are done for."

Headwinds, hazards and the Asian future at ST Book Club

Eunoia Junior College student Chan Yi Jia, 18, found the talk motivating. "It has been really insightful to hear about how Singapore defends its national interests as a small country, as well as how the UN works. I appreciate how Prof Jayakumar gave examples to illustrate issues, such as how Singapore can play a part in assisting the Indonesian government to tackle the haze."

At the next Straits Times Book Club session on Oct 30, author and historian Kevin Y.L. Tan will discuss his latest book, Sole Purpose, with Straits Times Press general manager Tan Ooi Boon. The book traces the experiences of Austrian shoemaker and entrepreneur Helmut Widdek, who ventured into Asia as early as 1973.

Readers can register for the talk at str.sg/J4Lk.