The National University of Singapore (NUS) has suspended academic Huang Jing without pay with immediate effect, while the university works with the Home Affairs Ministry on the matter.

A spokesman said that his employment at the Lee Kuan Yew School of Public Policy was conditional on him having the necessary work permits.

Dr Huang, who had his permanent residency cancelled, can thus no longer work here.

"As these permits have been cancelled, we would not be able to continue with his employment," the spokesman said.

Yesterday, the Ministry of Home Affairs announced that it had permanently banned him and his wife Shirley Yang Xiuping from Singapore, and cancelled their PR status. It said that Dr Huang had worked with intelligence organisations and agents from a foreign country to influence Singapore's foreign policy and public opinion.

The 60-year-old was also the director of the Centre on Asia and Globalisation and Lee Foundation Professor on US-China relations at the LKY School.

NEED TO BE ALERT

Singapore is an influential soft power country - that is why people would want to influence us. If we are not careful, we will unwittingly become victims of agents of influence of those who want to do us in.

A NATION WITH INFLUENCE

For small countries to survive, we need to be seen and heard. Singapore, despite being tiny, is always on the radar so people would want to influence us.

ASSOCIATE PROFESSOR ANTONIO RAPPA, head of the Singapore University of Social Sciences' management and security studies programme, on why foreign powers would want to try and influence Singapore's foreign policy. 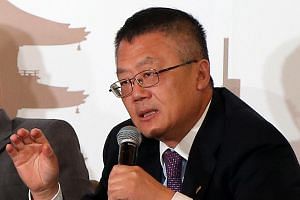 When agents of influence seek to shape public opinion

The NUS spokesman said the matter is of serious concern, and it is cooperating fully with MHA.

"NUS does not tolerate such acts of foreign interference, even as we continue to value and uphold the diverse and international character of our university," she said.

Associate Professor Bilveer Singh, from the NUS Department of Political Science, said Singapore's policy of staying open to the world means "all kinds of elements" can enter the country, including its academic institutions.

He warned that the current incident is "the tip of the iceberg", and said the country has to exercise vigilance.

"Singapore is an influential soft power country - that is why people would want to influence us," he added. "If we are not careful, we will unwittingly become victims of agents of influence who want to do us in."

MP Vikram Nair, who chairs the Government Parliamentary Committee for Defence and Foreign Affairs, said the case is a reminder that "espionage is a reality of life".

On the attempts to influence Singapore's foreign policy, he said: "It is a back-handed compliment that Singapore's opinions actually matter, that we are well respected on the world stage."

Associate Professor Antonio Rappa, who heads the management and security studies programme at the Singapore University of Social Sciences, drew parallels between this incident and the Hendrickson affair in 1988.

In that case, Mr E. Mason Hendrickson, first secretary of the United States Embassy, was expelled from Singapore for interfering in local politics.

On why foreign powers want to try and influence Singapore's foreign policy, Prof Rappa noted that Singapore has been punching above its weight.

"For small countries to survive, we need to be seen and heard. Singapore, despite being tiny, is always on the radar, so people would want to influence us," he said.

Cases of foreign countries employing agents of influence are not uncommon, said Associate Professor Bernard Loo of the S. Rajaratnam School of International Studies. "These things happen not just between enemies, but also between friends."

Dr Huang Jing, who was banned permanently from Singapore yesterday, is an academic known for his expert views on China's politics and foreign policy, as well as US-China relations.

US CITIZEN WHO WORKED AT NUS

Until the ban, Dr Huang, a United States citizen who was born in 1956, was the Lee Foundation Professor on US-China relations at the National University of Singapore's (NUS) Lee Kuan Yew School of Public Policy (LKY School), where he also headed the Centre on Asia and Globalisation.

His curriculum vitae, available on the LKY School's website, chronicles a long list of achievements in academia and the study of international relations.

He has authored three books and many journal articles, book chapters and policy papers on China's politics, development strategy and foreign policy, as well as US-China relations, China's military and security issues in the Asia-Pacific.

Dr Huang, who received his PhD in government from Harvard University in 1995, spearheaded a number of projects while at the LKY School.

These include a consortium studying the development of Russia's far east, an effort that involves leading think-tanks from such countries as Russia, China, Japan and Singapore.

He also chaired projects studying China-India relations, and the energy policies of China, Japan and the US.

Dr Huang is also a frequent commentator in the Singapore media, including The Straits Times and Chinese daily Lianhe Zaobao.

His latest commentary for The Straits Times, published in June, was on the interdependence of the US and China.

Besides his academic work, Dr Huang is on the board of several organisations, including Keppel Land.

He is on the steering committee of the NUS Research Institute in Suzhou as well.

Before joining the LKY School, Dr Huang lectured at Harvard University from 1993 to 1994.

He also lectured at Stanford University.

He had been a senior fellow at think-tank Brookings Institution and an academic at Utah State University.

He has a master's degree in history from Shanghai's Fudan University, and a degree in English literature from Sichuan University in China.

INVOLVED IN ROW WITH CABBY

A dispute between Dr Huang and a cabby in June last year resulted in the police being called.

Lianhe Wanbao reported that Dr Huang demanded that the taxi driver step out of the vehicle at the end of a trip to the LKY School and "show respect" to him, after he gave the cabby a $1 tip.

A video recording of the incident also circulated online.

Correction Note: In an earlier version of the story, we reported that Dr Huang had lectured at Harvard University from 2013 to 2014. He has clarified that he lectured there from 1993 to 1994.