Nine people were hospitalised and they are currently in a stable condition.

The four events, including a wedding banquet, were held at the grand ballroom between Dec 1 and 3.

This is the fourth major food poisoning outbreak in recent weeks, after more than 400 people were affected by gastroenteritis in November.

The Ministry of Health (MOH), National Environment Agency (NEA) and Agri-Food and Veterinary Authority (AVA) said in a joint media statement on Wednesday (Dec 5) that they were notified of the first case at Mandarin Orchard on Tuesday.

They launched a joint investigation the same day, and took measures including collecting food and environmental samples for testing. Food handlers were also sent for stool screening.

Meanwhile, the NEA has ordered the hotel to close the grand ballroom and suspend the banquet kitchen serving it until further notice “in view of the suspected ongoing transmission and that all the affected cases had attended events or consumed meals” there.

The authorities said that there have been no cases linked to the other food and beverage premises in the hotel.

NEA has told the hotel to dispose of all ready-to-eat food, thawed food and perishable food items, and conduct thorough cleaning and sanitising of its premises including equipment, utensils, work surfaces and toilets.

The hotel has also been instructed to close the grand ballroom to conduct a thorough cleanup and disinfection, the authorities said. 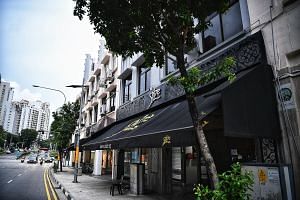 They have checked the other food and beverage premises at the hotel, and are working with the hotel to ensure that it reviews its processes for all its other kitchens.

Further inspections will be conducted to ensure that the premises are properly maintained and cleaned, and that the kitchen staff observe proper personal hygiene and food handling practices.

Members of the public who have visited the hotel's grand ballroom are advised to monitor their health status closely, MOH and NEA said.

Earlier, it was reported that 42 guests fell ill after attending a wedding banquet at the hotel on Sunday. Four of these guests have been hospitalised as of 9.30am on Wednesday, the authorities said.

Counsellor Matthew Tjow, his wife and three children were among the more than 400 guests who attended the wedding lunch banquet.

The 40-year-old said that he and his three children began showing symptoms of gastroenteritis on Monday, while his wife experienced some stomach discomfort on Tuesday.

“We are definitely feeling better in the past 24 hours. But my seven-year-old daughter was the worst hit among us,” he said.

“She had several bouts of vomiting back to back, and we were worried that she may be dehydrated. All of us haven’t had enough sleep in the past days.”

Mr Tjow added that his 10-year-old son is still running a fever on Wednesday.

“All of us came together on Sunday with the sole intention of celebrating the couple's marriage. It is unfair to have them put in such a predicament,” said Mr Tjow, who first met the groom about 20 years ago.

He said that a representative from the hotel had contacted him on Tuesday night and paid his family a visit on Wednesday afternoon.

A spokesman for Mandarin Orchard said on Wednesday afternoon that the hotel has been reaching out to affected guests to render support and assistance where possible, and to personally check on how they are doing.

In an update on Wednesday evening, a hotel spokesman said that its restaurants and other function venues are not affected.

"Our team will be in touch with the organisers of all upcoming events that will be affected to make alternative arrangements and assist in ensuring their requirements and concerns are addressed," the spokesman said.

"We are now working to rectify the situation expediently, and will continue to provide timely updates."

Meanwhile, hotel workers who handled food during the relevant banquet events have been temporarily relieved of their duties until they have completed all necessary medical tests and are cleared by the authorities, the spokesman said.

The hotel will also cease serving raw food prepared from its banquet kitchens while investigations are underway.

"We remain committed to adhering to stringent food hygiene and sanitation standards across our food and beverage operations, as we have always been," the spokesman added.

There have been three separate food poisoning incidents in the last four weeks.

On Nov 6, 81 people fell sick after eating food catered by Spize for a Deepavali celebration. A Sats officer, Mr Fadli Salleh, 38, died in hospital about a week later.