SINGAPORE - An electric bicycle that was left to charge overnight sparked a fire outside a Bukit Batok flat early on Thursday (Oct 12), with four neighbours including a five-day-old baby taken to hospital.

The incident occurred at Block 231, Bukit Batok East Avenue 5, at 3.50am, the Singapore Civil Defence Force (SCDF) said in a Facebook post.

A living room and corridor were razed by the fire, which SCDF put out with a water jet.

The e-bike that caught fire is believed to belong to the residents of a unit on the second floor. A woman from that unit was taken to hospital.

The device was being charged outside and was parked near the door of the opposite unit. A couple and their five-day-old baby in that unit were also taken to hospital with minor injuries.

The baby's aunt, who also lives with the family in the opposite unit, told The Straits Times on Thursday night that the infant is being monitored around the clock.

The 24-year-old who gave her name only as Ms Nur said: "We woke up at around 3am because we heard loud popping sounds and we opened the door to take a look. That's when we saw a lot of smoke."

Twelve adults and a baby live in that unit. The family called 995 and SCDF helped them to escape the flat through their bedroom window  by breaking it. They fled the four-room flat by descending a ladder.

Said Ms Nur: "Some parts of our ceiling and walls are blackened by the smoke and the cables were damaged (by the fire). We just got our power back around 8pm."

They are staying in the flat on Thursday night and just need to clean it up, she said. She added that their neighbour usually charges the e-bike outside.

SCDF said preliminary investigations showed that the fire was caused by the overnight charging of an e-bike.

More fires were caused by batteries of electrical bicycles, personal mobility devices and power banks last year, the SCDF had said in February.

Last year, 17 fires were caused by electrical bicycles, up from 14 in 2015. There were 14 fires involving PMDs, a significant increase from just one case the previous year. 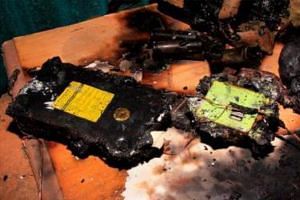 In July this year, an electric scooter left to charge overnight in Choa Chu Kang sparked a fire, with three people fleeing the unit.

- Avoid overcharging the battery, especially leaving it to charge overnight.

- When charging such batteries, place them on hard flat surfaces to allow optimal dissipation of heat.

- Do not place the charging battery near combustible materials.