SINGAPORE - An electric scooter reportedly left to charge overnight in a Housing Board flat in Choa Chu Kang sparked a fire, with three people fleeing the unit.

The fire broke out at 3.50am on Friday (July 28) at a 10th-floor unit in Block 230, Choa Chu Kang Central 1, the Singapore Civil Defence Force told The Straits Times.

A woman who lives in the flat, who declined to be named, told Shin Min Daily News in a report on Friday that she was sleeping when she heard a loud explosion.

It was followed by a burnt smell, coming from a room. She went to check and saw that the battery charger of the e-scooter inside was on fire.

"After my children saw it, we quickly called SCDF for help and rushed out of the house," she said.

She said the family usually ensures that the battery charger for the device is plugged in properly, and does not know why it caught fire.

"Luckily no one was in the room when it caught fire, if not I can't imagine what would have happened," she said.

SCDF said it dispatched a fire engine, two Red Rhinos, two fire bikes, a support vehicle and an ambulance to the scene.

"The fire involved contents of a bedroom and was extinguished by SCDF with a compressed air foam backpack and a water jet," said the spokesman.

ST understands that SCDF officers had to conduct forcible entry into the unit as the door was locked. The residents are believed to have escaped through a window.

No one was injured.

Battery fires on the rise amid drop in fire cases

SCDF had said in May this year that were were eight fires involving batteries of personal mobility devices between January and April this year, up from three in the same period last year.

It advised the public to avoid overcharging batteries, especially overnight. 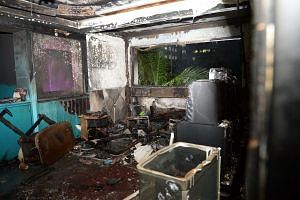 "Overcharging can cause permanent damage to the battery and result in battery swelling. Some models do not have a power cut-off function to prevent overcharging which could lead to sparking off a fire," said SCDF. "Such fires have the propensity to spread easily, particularly when there are combustible materials around."

SCDF also advised the public to place batteries on hard flat surfaces when charging, to allow optimal dissipation of heat, and cautioned against placing batteries near combustible materials.