In debunking the claims in Parliament on Monday (Jan 14), Dr Balakrishnan said the new Instrument Landing System (ILS) uses the exact same flight path that aircraft landing at Seletar have used all along for visual flights.

The only difference is that with the ILS, pilots can land even in bad weather.

Flight procedures, such as those for the Seletar ILS, are a basic element of civil aviation that inform pilots on what they need to do to land or take off safely, he said.

The disagreement over flight procedures for Seletar Airport is part of a bilateral air dispute that includes Malaysia wanting to take back management of airspace over south Johor, a task long delegated to Singapore.

He stressed that the ILS imposes no extra requirements or limitations that prevent Malaysia from developing tall buildings in Pasir Gudang, or operating tall ships in Pasir Gudang Port. 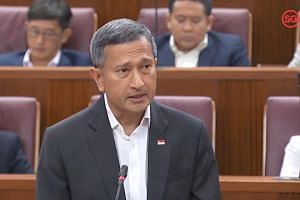 "There were allegations that Pasir Gudang will not be able to have buildings taller than five stories because of ILS, but if members cross the Causeway and drive around Pasir Gudang, you will see that there are, in fact, already structures as tall as 105m there (taller than many Housing Board blocks)," he added.

Showing the House a satellite photograph, he pointed to several existing high-rise developments in the Pasir Gudang area.

"The ILS has not and will not prevent the building of tall structures as alleged by Malaysia. And we have consistently stated that if Malaysia has any new plans for developments, we are prepared to discuss and adjust the ILS procedures, if necessary," he said.

Ultimately, he said, the purpose of the ILS procedures is to improve safety and facilitate flights, in this case especially for Malaysia's Firefly, which services many smaller Malaysian airports.

Firefly had agreed to move its operations to Seletar Airport on Dec 1, 2018.

But it later informed the Civil Aviation Authority of Singapore (CAAS) that Malaysia's civil aviation authority required Malaysian carriers to operate only to airports with an instrument approach.

"Ironically, CAAS was trying to facilitate Firefly's operations at Seletar by installing the ILS, which Malaysia has now objected to." Dr Balakrishnan said.

CAAS formally approached its Malaysian counterpart in December 2017. It, however, did not receive any response until the Malaysian agency objected to the ILS for the first time in November 2018.

Amid the tensions, the Malaysian civil aviation authority declared on Dec 25 (2018) a permanent restricted area in the airspace over Pasir Gudang for the purpose of military activities.

The information was disseminated through a Notice to Airmen, which is filed to alert the global aviation community of potential hazards along a flight route or at a location that could affect the safety of flight.

In its notice, the aviation authority said the restriction was to take effect on Jan 2.

What it meant was that flights from any country, including Malaysia, would need the prior approval of the Royal Malaysian Air Force to operate in that zone between 2,000 and 5,000 feet.

This would have forced flights operating to and from Seletar Airport to go up and down close to the airport to traverse above the restricted area, Dr Balakrishnan said.

"All over the world, aviation is by nature transboundary... CAAS, as the air traffic services provider for the area, was neither informed nor consulted even though these actions affected civil aviation operations out of Seletar Airport, cut through an established international aviation route, and affected flight efficiency and safety," he said.

Malaysia's declaration of a permanent restricted area escalated what was initially a matter concerning ILS procedures, a norm for many airports around the world, into a more serious issue affecting all flights arriving at or departing Seletar from the north.

"This was not helpful for commercial aviation in the area, and furthermore damaged the overall tenor of the bilateral relationship," Dr Balakrishnan said.

At his meeting with his Malaysian counterpart last week, both sides agreed that while Singapore would suspend the implementation of the ILS procedures for Seletar Airport, Malaysia would also suspend the permanent restricted area. They will do it for a period of one month, in the first instance.

The mutual suspension went into effect at midnight on Jan 9. This allowed normal operations to resume at Seletar Airport, with aircraft able to fly their normal established flight paths over Pasir Gudang in and out of Seletar, Dr Balakrishnan said.

"Unfortunately, Malaysia's Firefly will still be unable to start operating at Seletar due to its Malaysian regulator's requirement," he added.

Apart from the ILS issue, Malaysia has also expressed its intention to review the 1974 Operational Letter of Agreement on airspace arrangements in southern Johor.

The agreement stipulates that Singapore will manage the airspace that covers the Pasir Gudang area.

Singapore had said it would review the proposal after receiving it.

"In the meantime, in the interest of civil aviation safety, air traffic operations must continue according to current arrangements, and in accordance with ICAO requirements."

The transport ministers from both countries have agreed to meet later this month for further discussions, he added.