KUALA LUMPUR - Malaysian carrier Firefly has projected that it will incur monthly losses of up to RM20 million (S$6.6 million) due to the suspension of its direct flights to Singapore following the airspace dispute between Malaysia and the Republic.

The Malaysia Airlines subsidiary said the move has resulted in a "huge dent" in the company's finances.

"Firefly has been doing well over the past three years, so this is a huge dent to the group."

Singapore was Firefly's second-largest destination from Subang after Penang, with 20 flights daily.

The carrier suspended operations to Singapore from Dec 1, as it did not have approval from the Civil Aviation Authority of Malaysia (CAAM) to make the move from Changi Airport to Seletar Airport. CAAM had said that regulatory issues need to be resolved between the civil aviation authorities of both countries over the proposed move, as well as outstanding airspace issues.

Malaysia has protested against new flight procedures for Seletar Airport, claiming they would impose height restrictions and affect developments in Pasir Gudang town in Johor.

Singapore has, however, denied this, saying that the only change on introducing an Instrument Landing System (ILS) is that pilots will be guided using ground instruments so that they no longer have to rely on just their vision.

On Dec 25, Malaysia established a permanent restricted area for the purpose of military activities over Pasir Gudang. 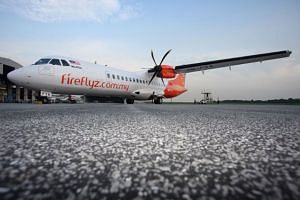 This means that flights from any country, including from Malaysia, would need prior approval from the Royal Malaysian Air Force to operate in that zone between 2,000 and 5,000 feet.

Singapore is concerned that the restricted area being in a "controlled and congested airspace" would impact the existing and normal operations of aircraft transiting through, the Transport Ministry said last week.

Besides the air dispute, Singapore and Malaysia are also locking horns over territorial waters off Tuas.

On Tuesday (Jan 8), the two countries agreed to defuse tensions as foreign ministers on both sides reiterated their commitment "to preserving the vital relationship between both countries and to improving bilateral ties, on the basis of equality and mutual respect".

On the air front, the ministers said Malaysia will immediately suspend its permanent restricted area over Pasir Gudang for flights, while Singapore will do the same for new aircraft landing procedures for Seletar Airport.

The arrangement will be for a month, in the first instance.

As a result of the latest development, Firefly's chief executive officer Philip See told The Malaysian Insight that he has sent a letter to Changi Airport Group on Wednesday to request for landing slots at Changi.

Singapore's Transport Minister Khaw Boon Wan had previously said that Firefly's slots at Changi have been given up and redistributed to other airlines.

"The tone set by the leadership has been one on diplomacy," said Mr See, referring to the ministerial meeting in the Republic.

"We also want to approach a more diplomatic stance and really just politely ask Singapore airport and say, 'look, in view that we don't have the infrastructure fully endorsed, the government has already removed the approval of the ILS, please accede to our request and release temporarily the landing slots in Changi'," he said.