SINGAPORE - In the past three years, the six local universities handled a total of 56 cases of sexual misconduct involving their students, 14 of which happened off campus.

Education Minister Ong Ye Kung disclosed this on Monday (May 6) in Parliament, as he made a call for universities' disciplinary processes to be "stringent but fair" as well as highlighted the need to tackle the growing concern of voyeurism in Singapore.

"We need to better balance the objectives of deterrence and redress for the victims against the rehabilitation of the offender. Balancing these objectives is important for an education institution, but it should not end up with penalties that are too lenient and have too soft a bite," he said.

He added that about 66 per cent of the cases - or 37 cases - were related to voyeurism, referring to Peeping Tom incidents and filming of people in vulnerable positions.

In response to several MPs who had asked about how many cases of sexual harassment and misconduct by undergraduates there have been in recent years, Mr Ong noted the student population varies across years, and there is "no discernible trend" in the past three years.

The number of sexual misconduct cases by student perpetrators per 1,000 students hovered around 0.2 in the last three academic years, he added.

His comments come in the wake of a public outcry over how the National University of Singapore (NUS) had handled a case of sexual voyeurism, after undergraduate Monica Baey, 23, took to social media to express her frustration over the punishment given to fellow student Nicholas Lim, also 23, for filming her showering in Eusoff Hall on his mobile phone.

The NUS disciplinary board had suspended him for a semester, banned him from entering all hostels, made him write an apology letter to Ms Baey and undergo mandatory counselling. 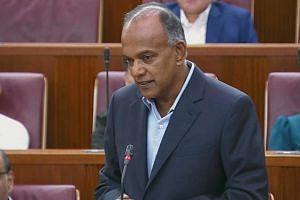 He also disclosed that of the 56 cases, the victims in 37 cases made police reports. Four cases are under investigation and there was insufficient evidence to make out offences in two of them.

Of the remaining 31 cases, 10 resulted in jail terms of between 10 days and eight months. Mr Ong said these were serious offences, involving outrage of modesty or multiple instances of voyeurism.

The universities also carry out their own disciplinary hearings and mete out a mix of penalties within their powers, ranging from an official reprimand, which will be reflected in a student's educational record, to suspensions and expulsion, which is the harshest punishment.

Of the 56 cases, five await hearings while four students quit the university before sanctions were imposed, he added.

Of the remaining 47 cases, 34 received an official reprimand, 26 were suspended for up to two school terms and 20 were banned from entering students' dormitories. Cases typically receive a combination of penalties, said Mr Ong.

He noted that of the 10 police cases that led to jail sentences, there was only one expulsion. This was later reduced to an 18-month suspension after the offender filed an appeal and the board took into account his psychiatric condition.

The universities will review their disciplinary mechanisms and aim to strengthen their penalties, the minister said. "Two strikes and you're out" cannot be applied across the board, he added, but neither should expulsion be the default for all forms of misconduct.

"The penalty must continue to fit the offence, but there has to be a significant adjustment at the most egregious end of the spectrum of misconducts when they are serious criminal offences that undermine the safety and security of university campuses.

“We must ensure that potential offenders know the severe consequences of their actions, including the impact on their future,” he said.

At the same time, he added, if the offender is remorseful and has accepted and served punishment, he deserves a chance to make good.

Mr Ong also said voyeurism must be recognised as a growing concern, even as people are being exposed to the Internet from a young age and advances in technology have made video recording easier.

"This led to some thinking that voyeurism is not a serious offence, and they cannot be more wrong," he said, adding that he has asked all universities, polytechnics and the Institute of Technical Education to review their disciplinary procedures and keep up to date with changing trends to ensure student safety on campus.

He also cautioned against public overreaction, especially in the light of how personal details of the offender in the recent NUS case, Mr Lim, had been dug up online.

"We are a people with a strong sense of justice, who see the importance of differentiating between right and wrong; this explains the strong reaction to Ms Monica Baey's situation. We also continue to believe in tough but fair systems of punishment, to keep the Singapore living environment the way it has been," said Mr Ong.

"But we should always refrain from trial by media, doxxing and resorting to mob justice. No matter how wrong an offender is, we need to respect the due process," he said, adding: "I hope that as a society, we will give him and his family the time and space they need to reflect on his actions, to turn over a new leaf and move forward."

The top priority now, he said, is for the universities to see how they can do better, and take concrete steps to improve campus safety and victim support.