SINGAPORE - The National University of Singapore (NUS) will convene a committee to review its disciplinary and support frameworks after a female undergraduate accused it of not doing enough to punish a fellow student who had filmed her showering.

The committee, which will include members from the NUS Board of Trustees, will study the approaches taken by other international institutions and solicit views from various stakeholders, NUS dean of students, Associate Professor Peter Pang, said in a statement on Saturday (April 20).

Many netizens have shared and commented on Ms Monica Baey's posts about being filmed in a shower at student residence Eusoff Hall.

The third-year NUS communications and new media undergraduate revealed the man’s name and personal details. In several other stories on her Instagram on Thursday and Friday, Ms Baey called for tougher action to be taken by the university against the Chemical Engineering student.

"I want real consequences for perpetrators that commit such acts and I want to know that NUS will reprimand them seriously so other potential perpetrators know they will face punishment if they commit (such acts)," she wrote in a story on Friday.

The 23-year-old, who is currently on an exchange programme in Taiwan, told The Straits Times that the incident took place at 1am on Nov 25, 2018 while she was staying over in the hall with one of her friends.

She said she noticed an iPhone being held underneath the door after she finished showering.

The Peeping Tom ran away after she shouted, Ms Baey said. A girl who was outside the shower stall told Ms Baey she saw a man who ran down the staircase.

Shortly after, Ms Baey notified campus security and the Junior Common Room Committee of Eusoff Hall, the student representative body of the residence, of the incident.

Ms Baey and the man were both former residents of the hall. Ms Baey said she knew the perpetrator personally, and he was the boyfriend of one of her friends who is a Eusoff Hall resident.

She added that she sent a statement pushing for further action to the NUS Registrar's Office.

According to her, the perpetrator was made to write an apology letter and would have to undergo mandatory counselling. He was also banned from entering Eusoff Hall and suspended from school for a semester.

In an Instagram story, she posted a screenshot showing that she received the apology letter through NUS on Feb 21.  While describing his actions as “vile and inappropriate”, the man, who signed off as Nicholas, claimed he was under the influence of alcohol when the incident took place.

In the statement on Saturday, Prof Pang said: "We are sorry for Ms Monica Baey's distressing experience, which is of extreme concern to the university."

The university is in the process of reaching out to her to offer support and assistance, he added. 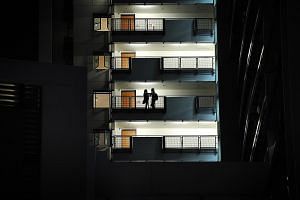 Prof Pang confirmed that the case was investigated by the police and the perpetrator was given a 12-month conditional warning by the authorities. Ms Baey was informed of the warning in January this year.

He said that when such offences are committed, the NUS Board of Discipline, which comprises student and faculty representatives, will conduct its own disciplinary proceedings.

"It will consider factors such as the severity of the offence, the need for justice for the victim, the rehabilitative needs of the student offender, the safety of the NUS community, and also the decisions and penalties imposed by the authorities," Prof Pang said.

Other NUS students have since taken to social media to comment on the incident, with some saying they had heard of similar incidents that went unreported, and others sharing their experiences of such acts.

Ms Laura Ng, 24, who graduated from NUS in 2018, told ST that she felt it was time for the university to take more action against those who commit such crimes.

"They aren't being fair to the victims. The school appears to be taking the stance that they don't care for the victims' well-being and dignity, which is quite upsetting," said Ms Ng, who stayed at a residential college in NUS.

Following the incident, Ms Baey made a police report at Clementi Police Station. ST has contacted the police for more information.

On Saturday, Ms Baey again took to her Instagram account, firstly to thank those who have been supporting her, but also to call for NUS to adopt a zero-tolerance policy towards any form of sexual misconduct.

She also urged NUS to have stricter punishments, more transparency in how cases are handled, and a code of conduct on sexual crime. She also asked for more support and counselling for victims, as the damage can be “long lasting”.

Last year, a 26-year-old NUS student was caned three strokes and given nine months' jail after molesting a classmate two months after he was given a conditional warning for peeping at a hall mate in the shower.

In 2016, a 24-year-old male student at the Nanyang Technological University (NTU) was arrested after filming a resident in the shower at a student dormitory.

More than 60 videos of other male students showering were found saved in his phone.