SINGAPORE - The fundamental problem between the United States and China is a mutual lack of strategic trust, said Singapore's Prime Minister Lee Hsien Loong on Friday (May 31).

This bodes ill for any compromise or peaceful accommodation, he said in a keynote address at the Shangri-La Dialogue.

"But to go down the present path would be a serious mistake on both sides," he told an audience of defence ministers, military chiefs, policymakers and analysts, including from the US and China.

The annual defence summit comes at a time of escalating trade tension between Washington and Beijing, with both sides imposing tit-for-tat tariffs worth billions of dollars on each other's goods.

Speaking at the opening dinner of the three-day summit, PM Lee said there is no strategic inevitability about a US-China face-off.

But at the same time, if such a face-off does happen, it will be nothing like the Cold War.

First, he noted, there is no irreconcilable ideological divide between the US and China.

China may be communist in political structure, but it has adopted market principles in many areas.

"The Soviets sought to overturn the world order. But China has benefited from, and by and large worked within, the framework of existing multilateral institutions," he said.

During the Cold War, the communist bloc sought to export communism to the world. But China today is not attempting to turn other countries communist.

"Indeed, it is often criticised for being too willing to do business with countries and leaders regardless of their reputation or standing, citing non-interference in the internal affairs of other countries," he said.

Second, China has extensive economic and trade links with the rest of the world, and is a major node in the world economy, unlike the Soviet Union which had negligible economic links outside the Soviet bloc, said PM Lee.

"In fact, all of the US' allies in Asia, including Japan, the Philippines, South Korea, Thailand and Australia, as well as many of its friends and partners, including Singapore, have China as their largest trading partner," he said. "They are all allies of the US, friends of the US, but their largest trading partner is China. They all hope that the US and China will resolve their differences. They want to be friends with both: to nurture security and economic ties with the US, as they grow their business links with China."

As such, there can be no clear division between friend and foe in a "new Cold War", he said. 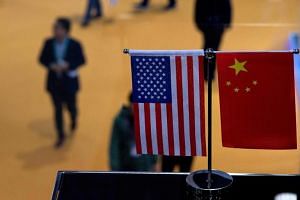 Neither is it possible to create Nato or Warsaw Pact equivalents with a hard line drawn through Asia, or down the middle of the Pacific Ocean, he said.

But if there is indeed a conflict between the US and China, where will it end, he asked?

He noted that the Cold War ended after the planned economies of the Soviet Union and Eastern European countries collapsed under the pressure of enormous defence spending.

"Even then, it took 40 years. It is highly improbable that the vigorous Chinese economy will collapse in the same way."

PM Lee said China cannot take down the US either.

"The US is still by far the strongest country in the world. Its economy remains the most innovative and powerful, and its military capabilities far exceed anyone else's. Americans worry about China catching up with the US, but although China may be ahead in some fields, it will be many years before China can equal the US," he said.

"And contrary to what some people in China think, the US is not a declining power, nor is it withdrawing from the world. In fact, the US has made clear its intention to compete robustly, though in a different mode than before."

In a speech that sketched out the perspectives of Singapore and South-east Asia and also touched on what other countries can do to stem the growing hostility and instability, PM Lee said that even if there was no outright conflict between the two major powers, a prolonged period of tension and uncertainty will be extremely damaging.

Many serious international problems like the Korean situation, nuclear non-proliferation, and climate change cannot be tackled without the full participation of the US and China, together with other countries.

"In economic terms the loss will be not just a percentage point or two of world GDP, but the huge benefits of globalised markets and production chains, and the sharing of knowledge and breakthroughs that enable all countries to progress faster together," he added.

"We should therefore do our utmost to avoid going down the path of conflict, and causing enmity on both sides that will last for generations," he said. "Of course, it is the duty of security and defence establishments to think the unthinkable, and plan for worst case scenarios. But it is the responsibility of political leaders to find solutions to head off these extreme outcomes."

Reiterating a point he has made many times, PM Lee said that US-China relations will define the tenor of international relations for years to come.

"It is natural that the two powers will vie for power and influence, but competition should not inevitably lead to conflict. We hope the US and China find a constructive way forward, competing certainly, but at the same time cooperating on major issues of mutual interest and global importance," he added.

He observed that there are those who argue that a compromise is not possible, or perhaps, not desirable, because the US and China hold such different values.

To this, PM Lee said: "To expect every country to adopt the same cultural values and political system is neither reasonable nor realistic. In fact, humankind's diversity is its strength. There is much we can learn from one another, from the differences in our values, perspectives, systems, and policies. The story of humankind's progress has been one of exchange of ideas, and continuous learning and adaptation."

Noting that influential American diplomat Henry Kissinger had said last year that "we are in a very, very grave period for the world", PM Lee added that no one can predict which way events will develop.

He turned to the history of South-east Asia in the last two centuries to show that things could go either way.

When there was rivalry between great powers the region had suffered from destruction brought by war and occupation, and also divided into opposing camps or become isolated from the world economy, he said.

At other times, the region has benefited from international cooperation that created an open, stable environment where countries could prosper in peace, he added.

"On a long view, we cannot rule out any of these eventualities," he said.

"But in our own generation, we must work together to maximise the chances that countries will have the wisdom and courage to make the right choices, opt for openness and integration, peace and cooperation, and so preserve and expand the progress that we have made together."