SINGAPORE - South-east Asia is no stranger to the great game of nations, starting from the days when Singapore became a trading outpost for the British 200 years ago to the Cold War in the 20th century, said Prime Minister Lee Hsien Loong on Friday (May 31).

In recounting the history of South-east Asia, as it was divided and fought over, first by the colonial powers of the 19th century and then the big powers of the 20th, PM Lee offered a long perspective to the current strategic situation between the United States and China in his keynote address at the opening of the Shangri-La Dialogue.

Noting that the world is at a turning point, PM Lee said that globalisation is under siege and tensions between the US and China are growing.

"Like everyone else, we in Singapore are anxious. We wonder what the future holds, and how countries can collectively find a way forward to maintain peace and prosperity in the world," he added.

Singapore is commemorating the bicentennial of the arrival of Sir Stamford Raffles, who recognised the trade potential of South-east Asia and founded a trading post here, thus changing Singapore's destiny.

The Dutch, who had already colonised the Dutch East Indies, protested Raffles' action furiously but in vain, he added. "To preserve their monopoly, the Dutch had either prohibited foreign ships from operating in their ports or imposed high tariffs," said PM Lee.

"Raffles took a different approach. He set up Singapore as a free port. Trade boomed and the settlement prospered. The more open approach of the British delivered superior results," he added.

Over the next century, South-east Asia was divided between the British, Dutch, Spanish, French and, later, Americans in an intense rivalry where no single colonial power dominated the region.

PM Lee said that in the 20th century, the interests of big powers continued to intersect in the region. After imperial Japan invaded French Indochina in 1941, the US retaliated with an oil embargo on Japan, triggering the Pacific War.

"On the same day that Japan bombed Pearl Harbour, they also attacked Malaya and Singapore. There followed for us the Japanese Occupation: three years and eight months of oppression, fear and misery," he said.

Years later during the Cold War, the region was split between communist and non-communist states, and Vietnam became the battlefield for a proxy war between the two camps, he added. Meanwhile, China supported communist insurgencies and promoted armed revolution in the non-communist countries such as Malaysia and Singapore. 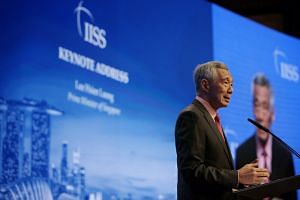 Under this backdrop, the five non-communist countries in the region - Indonesia, Malaysia, the Philippines, Singapore and Thailand - came together to form Asean in 1967 in a "remarkable act of statesmanship", said PM Lee.

"Several of the partners had a recent history of conflict with one another, and the wounds had yet to heal fully. But with Asean, the five countries eschewed conflict and took the path of dialogue, cooperation and friendship," he added.

As Asean integrated into the world economy and linked up with advanced countries, its member countries thrived, while the communist countries were held back by wars and the rigidity of their command economies, said PM Lee.

After the end of the Cold War, the US became the sole superpower and the communist countries opened up, with Vietnam, Cambodia, Laos and Myanmar joining Asean.

Over the next decades, the US, as the dominant power in the Asia-Pacific, provided a stabilising security presence, said the Prime Minister.

"International trade was expanding rapidly. Trade barriers came down, often led by the US. The Asean economies prospered through export-led growth and foreign investments," he said, noting that international frameworks like the World Trade Organisation and the United Nations Convention on the Law of the Sea established rules and managed conflict between countries big and small.

While China initially played only a minor economic role, "as its economy took off, it became a growing partner of the Asean countries and a major participant in regional affairs", he added.

PM Lee said he recounted this history of South-east Asia to show that the region is "no stranger to the great game of nations", and to offer some historical perspective to the current strategic situation.

"The US-China bilateral relationship is the most important in the world today. How the two work out their tensions and frictions will define the international environment for decades to come," he said.