SINGAPORE - Former PAP MP Tan Cheng Bock says he decided to form a party after concluding that the fundamentals of good governance in Singapore are being eroded.

Speaking to the media at a news conference ahead of his party's official launch next Saturday (Aug 3), the 79-year-old secretary-general of the Progress Singapore Party (PSP) said there had been an erosion of transparency, independence and accountability.

And he hopes his new party will help deprive the ruling People's Action Party (PAP) of a two-thirds majority in Parliament at the next General Election due by April 2021.

He told a room full of reporters: "After the last presidential election I thought I should retire from politics and rest. I've already served in Parliament for 26 years as an MP. I've spent a great deal of my life in public office.

The 79-year-old, who had contested the four-way presidential election in 2011 but lost narrowly to Dr Tony Tan Keng Yam, said many spoke to him and urged him "not to go quietly into the night".

"They asked me to step up again and rally those who want to serve Singapore for the country and people," Dr Tan added.

As he made a speech and fielded questions from reporters, he cited three issues which he said illustrated how good governance had been eroded.

First was the appointments of people to important positions in the Government.

Alluding to a lack of transparency in the process, he said: "I think there must be many who are wondering why, for example, the wife of our prime minister has been appointed to be the CEO of Temasek. As you all know Temasek is part of our reserves. We want to know how that selection process was made."

Soon after Ms Ho became executive director in 2002, then Temasek chairman S. Dhanabalan said she was appointed on merit and not family connections.

He also said PM Lee, who was then Deputy Prime Minister and Finance Minister, agreed to the appointment after Mr Dhanabalan ensured Ms Ho would not report directly to the Finance Ministry.

Second, the amendments to the elected presidency in 2016 to ensure minority representation showed how Parliament was used the wrong way, said Dr Tan, from a stage set up in a function room at the Swissotel Merchant Court.

The constitutional changes had led to the 2017 presidential election being reserved for Malay candidates as there had not been a president from the community in five presidential terms.

Dr Tan had previously suggested it was done to disqualify him from contesting, and had questioned the timing of the reserved election in a court challenge.

Referring to how MPs had also brought up the issue in Parliament, he said: "When Parliament refuses to answer questions from the opposition, and push those questions to the courts to decide, it is wrong again. Parliament must answer all questions from Members of Parliament. You cannot push to courts for an answer. To me, when I saw this happening, I sensed that something is wrong."

Third, the parliamentary debate on the fate of founding prime minister Lee Kuan Yew's house at 38 Oxley Road was similarly inappropriate, he said.

Prime Minister Lee Hsien Loong and his siblings have been locked in a long-running dispute over what should be done with their late father's house, and the Prime Minister had asked MPs to question him robustly during a two-day debate in Parliament on the issue in 2017.

During the hour-long session Dr Tan, who is secretary-general of the PSP, pledged that his party would bring change to the political landscape.

He did not elaborate on how this would be done and also declined to answer questions on policies, saying that he would disclose more during the party's official launch.

On whether he was aiming for a regime change, he said: "When I form a political party, it's not just to be opposition all the time. A day will come when this party grows and this party goes into Parliament, reveal their strength. Let Singaporeans judge them, whether they are capable of forming the next government.

But later, Dr Tan said he hoped that at the upcoming general election that has to be held by April 2021, the PSP and other opposition parties can deprive the PAP of the two-thirds majority needed in Parliament to make constitutional changes.

"If in this general election, we still fail to win one-third of the seats... I don't see much change can happen," he added.

Speaking about how he hoped to do this, he brought up his experience as a PAP MP, saying that he would share with his team what he had learnt in Parliament, running town councils and as head of the government feedback unit.

He also said he hoped to nurture in his team the same spirit of selflessness and public service that the first-generation PAP leaders exemplified.

Dr Tan said his party's members are mostly from the grassroots, and he is not just looking for scholarship holders but people whose hearts are "in the right place".

Asked whether Mr Lee Hsien Yang is a member of his party, Dr Tan said they are good friends but that if Mr Lee wanted to join the party, it would have to be "on my PSP terms".

Mr Lee, who has been locked in a bitter feud with his older brother, PM Lee, has been open in his support of Mr Tan's new party. The two men have been spotted on a couple of occasions having breakfast together, once at a hawker centre in the PM's ward.

Said Dr Tan: "I must say if he wants to join me, he is free to but he must adhere to my PSP terms, because many people would have thought he was coming to join me for his personal agenda.

"He must make it clear. I'm very clear and he knows if he joins, he must join on my terms."

Dr Tan entered politics in 1980 and was a six-term MP for the former Ayer Rajah single-member constituency. 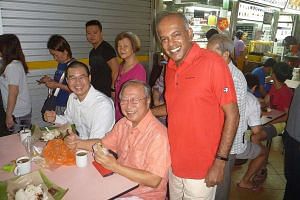 While Dr Tan was asked where he would be contesting and who would be chosen as PSP candidates for the coming GE, he remained tight-lipped.

However, he was willing to share that his party will field a "very mixed bag" of candidates from many backgrounds like businessmen, academics, ordinary people and social workers.

"What's more important to me is that their heart must be in the right place," Dr Tan said.

Dr Tan is encouraged that his party today has a couple of hundred volunteers, having started about three months ago.

Still, they need more help and will continue to recruit volunteers as "this is not a one-man project", Dr Tan said.

On working with other opposition parties here, Dr Tan said it was his intention to form a "loose alliance" with them.

"I've been approached by many of them who come and asked whether I can take the lead to form a very loose alliance, so that when we come to the general election, we will be a much bigger force to challenge the PAP," he added, but declined to elaborate on how the talks are proceeding.

While it may be difficult to work with other opposition parties due to "personalities", it would not impossible to work with them.

Among the key concerns for opposition parties here are three-cornered fights which could dilute their vote share and chances of winning the constituency, said Dr Tan. Discussions and deliberations will be needed to avoid them.