Dr Tan, 78, posted on Facebook photos from his breakfast with Mr Lee Hsien Yang, adding that they were with some friends.

From one of the photos, the meal appears to have taken place at Ang Mo Kio Market and Food Centre in Ang Mo Kio Avenue 10.

Mr Ang also posted on Facebook, saying that he was "pleasantly surprised" to bump into Dr Tan and Mr Lee.

"Didn't (realise) that many from across the island knew that there are good deals and value for money options available here," he added.

Dr Tan announced in a Jan 18 Facebook post that he had applied to register the Progress Singapore Party on Jan 16, saying it would comprise 11 other "like-minded Singaporeans".

He declined to name them, but said in his post that some members were former cadres of the ruling People's Action Party (PAP). 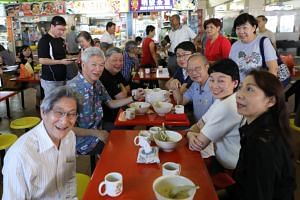 S'poreans have to decide who can serve them better, says Heng on Tan Cheng Bock's new party

Mr Lee Hsien Yang publicly supported the move, congratulating Dr Tan in a Jan 24 Facebook post and said that Dr Tan has "consistently put the interests of the people first".

"We are fortunate that he has stepped forward to serve Singapore… Cheng Bock is the leader Singapore deserves," he added.

The next general election must be held by April 2021. Dr Tan lost narrowly to Dr Tony Tan Keng Yam in the 2011 presidential election.

The hawker centre is in Dr Tan's former Ayer Rajah constituency when he was an MP with the PAP from 1980 to 2006.

Mr Lee told The Straits Times at the time: "We were just here to have breakfast."

Dr Tan later said on Facebook: "We wanted to catch up with each other as we have not met for quite a while… It was a good breakfast, not only the food, but (also) the sharing we had on world affairs and the current state of politics in Singapore."

"I told Dr Tan to come more often. I tell this to a lot (of) people - good for business in Chong Pang," Mr Shanmugam said on Facebook, adding that he also took a photograph with Dr Tan.