SINGAPORE - The upcoming Budget will focus on Singapore's growing needs in education and healthcare, as well as on giving a boost to the country's security and its ability to defend itself, said Finance Minister Heng Swee Keat.

Mr Heng, who will deliver the Budget statement on Feb 18, said another priority will be to help Singaporeans face significant changes taking place in the global economy and make use of opportunities, especially with technology.

He was speaking to reporters on the sidelines of a community event in Tampines on Sunday (Jan 20) to spruce up the homes of low-income families.

Ahead of Budget 2019, Mr Heng said: "We've done well in providing healthcare and education. We'll continue to do that; the needs in those areas are growing. At the same time, the needs for better security and better ability to defend ourselves are also growing."

"Budget will focus on these very key areas - in security, on taking care of social needs, especially in education, healthcare and, of course, in transforming our economy," he added.

"The needs are very large, whether it is building big-scale infrastructure projects, like our MRT lines or the airport, or especially our HDB flats, or whether it's taking care of our seniors, and in fact all Singaporeans," said Mr Heng. 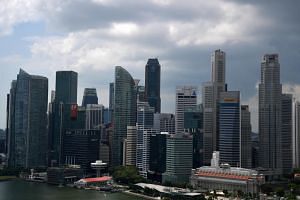 Singapore must continue to transform economy, says Heng Swee Keat, as he calls for Budget suggestions

"We must take this opportunity to ride this wave of change and enable Singaporeans of all ages to do well in the coming years," he said.

Mr Heng added that Singapore has to be "very watchful about global developments", when asked how the recent rejection of the Brexit deal could affect Singapore.

Mr Heng cited developments such as the risk in the global economy, the new risk building up, be it Brexit or the protectionist movement growing around the world.

He added: "People's support for globalisation is weakening because there is a sense that globalisation has left some people behind. And unfortunately, some of the developments are negative, even for their own country, even for people who advocated a particular course of action, they're now regretting it."

Said Mr Heng: "It just shows that when we make economic policies, we have to be very very thoughtful of the long-term implications, and that we cannot avoid doing the difficult things."

Singapore is on the right track by starting the process of restructuring its economy, he added. "It's not easy; a lot of hard work goes into companies transforming themselves, a lot of hard work by workers to learn new skills. But it is the right thing to do and I hope that we can sustain the momentum."

He noted that corporate leaders are key players in the economy's transformation, and that Singapore must stay focused in its restructuring and upgrading of skills, and finding meaningful partnerships around the world in order to stay competitive.