SINGAPORE - The co-founder of the famed nasi lemak restaurant The Coconut Club has died at the age of 40.

Mr Lee Eng Su died at home on Sept 12, a family member confirmed to The Straits Times on Saturday (Sept 14). He was not married and his family declined to say what he died of.

The Coconut Club and its sister eatery Belimbing Superstar, which has been opened for only three weeks, closed on Friday and will reopen on Tuesday. Both outlets are in Ann Siang Road.

The Coconut Club opened in 2016 and shot to fame after Prime Minister Lee Hsien Loong hosted Philippine President Rodrigo Duterte to a meal there shortly after its opening. The restaurant also made it to the Michelin Guide's Bib Gourmand list last year.

The late Mr Lee spoke passionately about how nasi lemak is not just a dish but a "cuisine" when he talked to ST in 2017. After attending a nasi lemak convention in Kuala Lumpur in 2014, the dedicated chef was inspired to work on perfecting his own version that is made from scratch.

"I'm very sad and upset to hear the news," he said.

"What he has done is very important for Singapore - to preserve heritage food that is authentic and true. It is done with a lot of care and I have a lot of respect for what they have achieved."

Coconut Club staff ST spoke to remember Mr Lee as not just a good and caring boss, but part of their family. 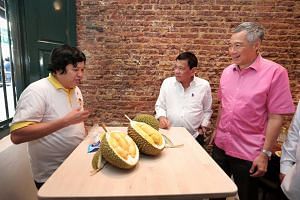 Ms Laura Chan, a 21-year-old SMU undergraduate who works part-time at eatery, said: "When he interviewed me for the job, he told me about how everyone is family at the restaurant.

"When I told him about how much I love my grandparents, he cried because he understood how important that was. That was life-changing for me, because I've never met someone so loving.

"He has always been a beacon of light for all of us."

Single mum Michelle Paul, 29 and a full-time member of the service staff, added: "I was very broken when I met him, but he made an effort to always ask how I was and have good conversations with me.

"I was previously working part-time and did not plan to stay in the F&B industry. But working with him made me love The Coconut Club. He had a dream for everyone, and wanted us to grow."

Mr Nazrin Shah, 27, one of the chefs at Belimbing Superstar, which specialises in Peranakan economy rice, recalls how Mr Lee helped him when he was going through a break-up: "I wasn't myself then, but instead of firing me, he paid for me to go for therapy sessions.

"He always had a dream for educating the community and giving back to society. We want to carry on his legacy."