SINGAPORE - From fragrant nasi lemak made with fresh, hand-squeezed coconut milk, to bowls of decadent chendol, a rich spread of local favourites was on the menu for Prime Minister Lee Hsien Loong and Philippine President Rodrigo Duterte on Friday (Dec 16).

Mr Duterte, who was here on a state visit, was hosted to lunch by PM Lee at The Coconut Club, a hip Ann Siang Hill restaurant dishing out Singapore hawker staples with an upscale twist.

Kerabu, a Malay salad, studded with dried shrimp and peanuts, and soto ayam, or chicken broth, were also served.

Both leaders ended the meal with durian - a Singapore favourite, and a key export of Mr Duterte's home city of Davao.

It was PM Lee's second time indulging in the fruit this week, he said in a Facebook post.

He had a sampling of Malaysian durian on Tuesday (Dec 13), when he was hosted to dinner in Putrajaya by Prime Minister Najib Razak. PM Lee was there for the annual Singapore-Malaysia Leaders' Retreat.

He quipped on Facebook: " International diplomacy is indeed dangerous for waistlines!"

The economic outlook of both countries, and potential trade and investment opportunities were among the topics they discussed.

Mr Teo noted that the Philippines, as one of Asia's fastest-growing economies and a newly industrialised country, is an important overseas destination for Singapore businesses.

He said: "We see great potential in furthering our two-way trade and investment through our close bilateral relationship with the Philippines." 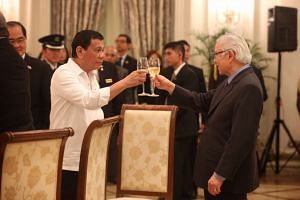 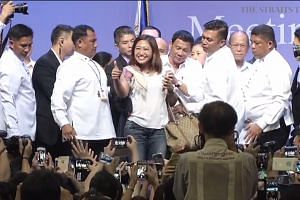 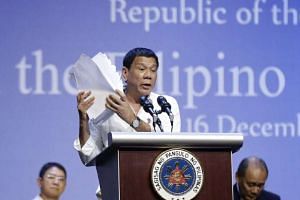 Duterte defends war on drugs, slams US in Singapore speech

In a statement, SBF said it will organise activities in the coming year for Singapore companies interested in pursuing business opportunities in the Philippines. Some plans include business missions, in partnership with IE Singapore, to Manila and cities such as Davao and Cebu.

Mr Duterte also visited the Singapore Botanic Gardens, where an orchid was named Dendrobium Rodrigo Roa Duterte in his honour.

He left Singapore on Friday night, after meeting members of the Filipino community here at a packed session at the Singapore Expo.