Two days after the death of Korean actor Cha In-ha on Dec 3, fans are still in the dark over why, or how, he died.

The police have ruled out an autopsy after they spoke to his family.

No will was left behind by the 27-year-old rookie actor, who was found dead at home.

His funeral was held on Thursday (Dec 5).

Cha was making progress in his career, with his latest casting coup in MBC drama Love With Flaws, that started screening on Nov 27.

His family, according to the producers, have asked for his scenes in the show to be retained, reported the Soompi portal.

They do not want the efforts of the actor, who debuted two years ago as a member of an acting group called Surprise U, to go to waste.

The producers have issued a statement, praising Cha for "always working hard" and providing a "shining presence on the set" in order to produce a good drama.

Oh posted her tribute to Cha, writing: "It's cold... Be careful on your way. Thank you for being my older brother."

Cha's death marks another setback for the Korean entertainment industry which was rocked recently by the deaths of Sulli, 25, and Goo Hara, 28.

The two singers were reportedly harassed by netizens who posted nasty comments about their romantic relationships.

Some fans have wondered if Cha was also targeted by cyber bullies, even though he is not as well-known as Sulli and Goo, and would not have drawn too much attention from outsiders.

If he was indeed depressed, that did not square with what he said about his life in a video that was reportedly shot in November.

In the interview, he expressed his goal to further develop his craft and noted that "anyone can get new inspiration, depending on the environment", reported the allkpop portal. 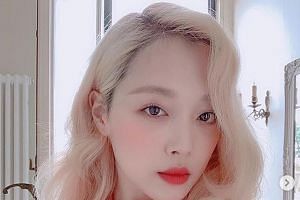 Dark side of K-pop

"I want to be someone who is constantly evolving as an actor and a human being," he said, adding that he did not want his life to be dictated by what others feel he should, or should not, do.

He noted that he "kept running with the courage and hope to do better" this year, and was optimistic that he would achieve more next year.

Revealing his simple routine to unwind after a hectic day, he mentioned his fondness for sweet treats and baths.

Other fans noted that Cha was also looking out for his supporters a day before he died.

"Try not to catch a cold," he posted on Dec 2, referring to the winter in South Korea.

But some netizens think that it is hard to really know the mental state of K-pop artists, even if they seem in control in glitzy public events.

"I think they might be in pain, even though their life looks very fancy," one fan posted.