Ahn Jae-hyun has not resorted to tit-for-tat revelations even as wife Ku Hye-sun has posted about his alleged shortcomings.

But he reportedly has had to apologise to actress Oh Yeon-seo, his co-star in drama People With Flaws which they are now shooting, after Ku posted that he was having an affair.

Though she did not mention Oh's name, her post left little doubt over who she was referring to.

Oh's lawyers have denounced the speculation, warning that they would consider all means, including legal, to protect her reputation.

The constant washing of dirty laundry in public from Ku - who is fighting a bid from Ahn for a divorce - also threatens to affect the ratings of People With Flaws when it airs possibly in November.

History has shown that viewers have a tendency to boycott shows which feature stars involved in a scandal.

The stakes are high for Ahn since People With Flaws is his first drama since he shot Beauty Inside a year ago, reported the allkpop portal. 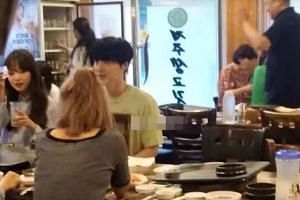 He has already been dropped by several brands after news of his marital woes surfaced.

Meanwhile, netizens have heaped scorn on Ku for dragging Oh into her family mess, and have urged Oh to file a defamation lawsuit.