SEOUL - Heads have rolled in the K-pop scandal and the boss of BigBang's agency YG Entertainment could be next to lose his job.

With the company's share price taking a 25 per cent walloping amid news that former BigBang singer Seungri, 28, procured prostitutes for VIP clients of his Burning Sun club, investors are now also directing their anger at its chief executive Yang Hyun-suk, 49.

Complaints have been filed with the authorities against Mr Yang for not supervising the company's artists carefully.

The K-pop industry was swamped by a deluge of bad press last week as the police went after the artists, resulting in four of them, including Seungri, announcing their retirement from showbiz.

Accusations have ranged from sharing of videos of women filmed in sex acts to collusion with corrupt policemen to keep illegal acts, such as drink-driving and drug use, under wraps.

According to lifestyle portal allkpop, he told reporters that he had not held back on revealing everything he knew. 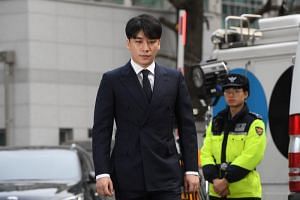 Talk had it that bribes had been paid to prevent the media from finding out about his drink-driving case in 2016.

Choi's agency stated last week that he would leave the industry and reflect on his past behaviour.

A top police official, who reportedly worked with Burning Sun to prevent any punishment for illegal acts, has confessed to having ties with its management, under questioning by the authorities. But the officer, who has been transferred to another department, denied lending a helping hand.

As the K-pop storm shows no signs of letting up, some netizens have begun to grow weary of the daily revelations, questioning why Cha Tae-hyun, 42, a cast member of variety show 2 Days & 1 Night, had to bow out of all his programmes, just because he was involved in betting with a fellow castmate over their performance in their own golf outings.