SINGAPORE - This has not been a good year for Seungri.

The 28-year-old K-pop singer, who is the youngest member of South Korean boyband BigBang, has been beset by one scandal after another, leading to an announcement on Monday (March 11) that he has decided to quit show business altogether.

Here is a timeline of the major events leading to the shock announcement.

MBC News Desk reports that staff of Burning Sun were accused of assaulting a customer in November last year (2018). The Seoul nightclub was owned by Seungri at that time.

The club-goer claimed he saw a woman being sexually harassed and asked for security guards to help. Instead, the staff allegedly assaulted him.

The nightclub came under subsequent police investigation over whether it was a hot spot for drug distribution and sexual harassment.

At a concert in Seoul, Seungri says: "I'm sorry for causing any disappointment to so many people and I'm reflecting on what happened. Despite there being a controversy, I didn't act responsibly. As I'm a celebrity, I'll think and act more carefully from now on. I want to apologise for not showing modesty and for acting carelessly."

Seungri holds a solo concert at The Star Theatre. 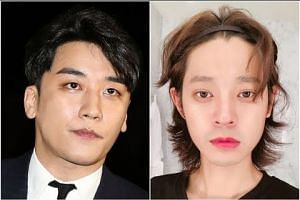 The singer is questioned by the police for more than eight hours over allegations of drug use and provision of sexual services to VIP customers at Burning Sun.

He says he will cooperate with the South Korean police and apologises through YG Entertainment, his management agency, for "issues that have been raised over the past month".

Seungri cancels his upcoming concerts in Jakarta and Osaka.

YG Entertainment confirms the singer will enlist in the military on March 25, according to lifestyle portal Soompi.

Reports say the singer has been charged with providing prostitutes to foreign investors at his private club.

Seungri announces his decision to quit show business. He writes on Instagram: "I think it is right for me to retire from this industry. I will cooperate (with) ongoing investigation and clarify every suspicion."

According to lifestyle portal Allkpop, YG Entertainment issues a statement saying he uploaded the post without consulting it first, adding: "It has still yet to be decided whether or not his contract will be terminated. We will let you know once the situation is figured out."

Seungri is reportedly among the recipients of sex videos sent by K-pop singer Jung Joon-young, who is said to have illicitly taped the videos and shared them via mobile messenger group chats. .