BEIJING (NYTIMES) - For more than half her life, actress Fan Bingbing was an icon of China's booming film and television industry, who evolved from girl-next-door roles into an international star and fashion celebrity.

Then last year, her career was convulsed by a tax scandal that precipitated her spectacular fall from public grace and tarnished an entire industry - one that the Chinese government is eager to put under even tighter creative control.

"No one can have smooth sailing throughout the journey," Fan said, her aphorism voiced with a calm - if perhaps practised - resignation during a rare interview, the first to touch on the scandal since it erupted.

For four months last year, Fan disappeared, and the unexplained absence of China's most famous movie star distressed millions of her fans and spread fear among her filmmaking colleagues.

No one knew it then, but she was being held under a type of house arrest while tax authorities scoured the records of her long and lucrative career as an actress, a luminary of the red carpet, a face of luxury brands and a successful businesswoman.

Now Fan, who turns 38 next month, is dipping her toe back into the waters of a society that once revered her.

"It may be a trough I encountered in my life or in my work, but this trough is actually a good thing," she said. "It has made me calm down and think seriously about what I want to do in my future life."

She recently posted her first updates to her 62 million followers on Weibo, China's version of Twitter, promoting charity events and announcing her breakup with her fiance, Li Chen, an actor and director.

She also appeared last month in a teaser on Instagram for 355, a film shepherded by actress and producer Jessica Chastain. Fan's role in the film - an action thriller featuring women playing foreign agents from around the world - had been in limbo since the scandal. Many of her projects still are. 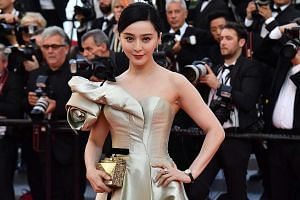 The yin and yang of the Fan Bingbing saga

One of her last movies, Air Strike (2018), was blocked from Chinese theatres and has languished in on-demand obscurity elsewhere. Luxury brands that dropped or distanced themselves from her have been slow to come calling again.

After she participated in a poetry reading in Beijing last month, reaction online was harsh.

"Our country should not let these type of people affect our next generation," one commentator wrote.

As her comeback attempt unfolds, the damage done to her own reputation, and to an industry China wants to use to project soft power around the globe, can start to be calculated.

Last October, China revealed that Fan had been fined nearly US$70 million (S$96 million) in unpaid taxes and penalties, while her eponymous studio was hit with a tax bill exceeding US$60 million. That same month, in her first public statement since June, Fan expressed her remorse.

She was spared criminal charges, but her manager at the time, among others, was arrested. Despite her celebrity, or perhaps because of it, authorities made an example of her at a time when the government is also cracking down on the Internet, on investigative journalists, and even earrings and tattoos judged to be in conflict with "core socialist values."

When the fines against Fan were announced, the government warned the entire film industry to come clean. Given the pervasiveness of tax evasion in China, virtually everyone fell under scrutiny.

"A lot of people in the industry have had to pay back taxes," Raymond Zhou, a film critic, said. "I've heard lots of numbers floating around, though you can never confirm them."

Producers have since retrenched. Regions that set up special economic zones to lure filmmakers suddenly stopped offering incentives. International investors appear to have been rattled, withholding support that not long ago flooded in.

What made Fan's legal troubles - and her unwanted role as an industry scapegoat - so surprising was her image.

She is no dissident artist but rather the scion of a family of performers and Chinese Communist Party members. Her last major film role was in Sky Hunter (2017), an homage (to put it politely) to Top Gun (1986) that was made with the cooperation of the People's Liberation Army.

After her detention ended, she said that she would have been nothing "without the party and the state's good policies."

Born in 1981, Fan was raised in Yantai, a port on the Yellow Sea. Her parents encouraged her to attend music school and become a music teacher, but at 14, she decided to become an actress instead.

She studied acting in Shanghai and at 16 landed a role in an 18th-century television drama, My Fair Princess (1998). It made her a household name.

With legions of young fans who grew up alongside her, Vanity Fair recently described her as "a sort of Emma Watson for Chinese millennials." It was her breakthrough role on the big screen that planted the seeds of her downfall 15 years later.

In 2003, she played the mistress of a television host in a film called Cell Phone. An actual television host, Cui Yongyuan, accused the director of slander because the plot bore striking, if inaccurate, parallels to his own career.

After Fan announced a sequel in May 2018, an infuriated Cui posted photographs online showing her contracts for the new film: one with a salary of US$1.6 million to be reported, and a second with the actual payment of US$7.8 million.

The practice of having "yin and yang" contracts is a common means of avoiding taxes in China, but Cui's accusation was "a match that lit the fuse," as Zhou, the critic, put it.

The authorities ultimately charged Fan with falsifying contracts four times. Another case involved a Chinese production starring Bruce Willis, a film known in English first as Unbreakable Spirit and later as Air Strike, about the Japanese bombing of China's wartime capital. Fan also had a role in that production.

The troubles that followed the disclosure have not only taken a toll on Fan but also appear to have had an effect on China's box office. Attendance in the first half of the year has plummeted, ending years of heady growth.

"The film and television industry has been languishing," said Hao Jian, a retired professor from the Beijing Film Academy.

The Chinese Communist Party, led by President Xi Jinping, who has transformed China's media landscape since taking office by clamping down on independent voices, has ramped up film censorship before the 70th anniversary of the People's Republic of China, cancelling the openings of several movies.

They include a big-budget war drama, The Eight Hundred, which depicts the battle against the invading Japanese in 1937. It was produced by Huayi Bros, one of the largest private studios, which has been reeling since the tax scandal. The company, which has reportedly been leasing back equipment, acknowledged through a representative that it had also backed out of its initial investment in 355.

In Fan's view, the industry should "calm down and ruminate" about where it has gone wrong - as she says she has done herself.

During the interview, held in a studio in an industrial section of eastern Beijing where she was posing for the Vietnamese edition of Harper's Bazaar, Fan appeared relaxed and confident. Wrapped in a crimson robe, her face and hair still made up from the fashion shoot, she sounded contrite but did not dwell on the details of what had happened to her.

"It is impossible to have the best of everything," Fan said, describing her present comeback situation as a "crossroads." How receptive her fans or the government will be to her attempted return remains to be seen.

Li Yu, a director and friend of Fan's, said the actress had endured her ordeal well. That did not surprise Li, who said Fan's strength and authenticity belied popular perceptions of beautiful actresses as weak and vapid.

Fan said she was ready for the next scene, no what matter it brings.

"There are regrets, pain and fragility," she said. "But I still feel that I need to keep on living."