The 37-year-old actress, whose June disappearance touched off wild speculation about her whereabouts, has appeared in the X-Men and Iron Man film franchises, and has garnered more than 62 million online followers in China.

Xinhua said an investigation by the Chinese tax authorities found that Fan had split her contract to evade taxes of 7.3 million yuan over payments for her role in Air Strike, a film due to be released this year.

Fan and companies she represented also evaded 248 million yuan in additional taxes, Xinhua said, but gave no details regarding this figure.

The tax bureau in the eastern coastal province of Jiangsu delivered its judgment to Fan on Sunday, levying fines of more than 596 million yuan for tax evasion and assessing overdue taxes of more than 288 million yuan, Xinhua said.

As a first-time offender, she will not face criminal prosecution if she pays the fine by an undisclosed deadline. The authorities also added that celebrities who come forward to pay taxes they have failed to pay by the end of the year would be spared from fines.

Breaking her silence, Fan, in a letter posted on Weibo on Wednesday, apologised for her actions. She said she is sorry for having "lost self-discipline in the face of monetary benefit".

"I have experienced unprecedented pain and agony in recent months," she wrote. "I have reflected on my actions. I am ashamed of what I have done, and I deeply regret my actions. I apologise sincerely to everyone."

She added: "For a long time... I adopted the practice of having separate contracts to evade taxes on the film Air Strike and some other projects. I am deeply ashamed." 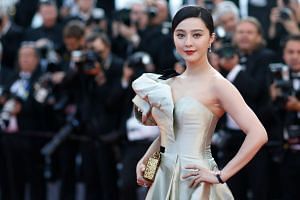 She said she accepted the punishment meted out by the authorities and will pay the fine.

Fan dropped off the radar in June amid reports that she was involved in an investigation into tax evasion in the film industry. Her vanishing act sparked wild speculation in China about her fate, including reports that she had been detained.

According to a South China Morning Post report on Wednesday which quoted an unnamed source close to Fan, the actress had been kept in a “holiday resort” used to investigate officials in a suburb in Jiangsu province. She has since been transferred to the authorities in Beijing, said the source.

While Fan's apology has garnered close to 100,000 retweets in the span of about two hours, it has only six comments, all of which are forgiving, invoking the Chinese adage that it is most important to know and change one's mistakes.

Netizens on the wider Weibo community are much harsher, with many questioning why the actress could escape a jail term despite the astronomical amount of taxes she had evaded.

One netizen said: "The working class earns only a few thousand yuan each month yet pay their taxes duly. Fan earns over hundreds of millions yet evades her taxes, it's truly despicable."

Another dismissed her apology, saying: "If apologies worked, why do we need the law?"

Some noted the discrepancies of her case to that of big name actress Liu Xiaoqing, who was jailed for a year after a tax probe in 2002.

Others want Fan out of the spotlight for good, with one comment on a news site report of the scandal saying: "Fan Bingbing should not appear in front of the public anymore."

Her fiance - Chinese actor and host Li Chen - has not responded to the tax evasion scandal.

Chinese TV anchor Cui Yongyuan posted on his Weibo after Fan's apology. He wrote: "The facts have shown that Air Strike is one big scam. One of those involved in the scam has been punished."

Cui was widely reported in May to have posted tax-dodging pay agreements online known as “yin-yang” contracts – one setting out the real agreed payment terms and a second with a lower figure for the tax authorities – that appeared to implicate Fan.

The A-lister had earlier denied Cui's accusations of her tax evasion. Although Cui eventually walked back his claims, China’s State Administration of Taxation announced shortly after that it was looking into the claims of tax evasion involving celebrities.

In September, she came in last out of a hundred stars ranked in a state-sanctioned study on the social responsibility of Chinese, Taiwanese and Hong Kong celebrities.