SINGAPORE - Crazy Rich Asians may not be the first Hollywood movie to receive the backing of the authorities here, but it is the most successful "made-with-Singapore" movie to date.

The red carpet premiere of the movie in Singapore takes place on Tuesday night (Aug 21) but it had already proved to be a blockbuster in the US where it opened a week earlier.

Last weekend, the film beat blockbuster shark movie The Meg to reach No. 1 at the American box office with a strong US$35 million opening over five days. The tally put it in the company of other big-budget films like Mamma Mia! Here We Go Again, which made US$34.3 million over four days during its opening week.

The movie features Singapore prominently both on screen and off, in part because the Singapore Film Commission (SFC) and the Singapore Tourism Board threw their weight behind it.

The SFC, for one thing, provided Crazy Rich Asians with a Production Assistance grant, which "provides funding for productions that highlight Singapore talents in credited roles, and infuse data and/or digital technologies into content for distribution on new and/or digital platforms".

The SFC also facilitated the filming in Singapore locations such as Gardens By The Bay and Newton Circus by linking up the movie producers to local government agencies such as the Ministry Of Home Affairs and Land Transport Authority.

Meanwhile, STB supported Singapore cast members in Los Angeles by pitching them for interviews and press opportunities in the United States. STB and SFC did not say, however, how much they spent supporting the movie.

Blink and you'll miss it. Can you point out all the Singapore places and faces in the trailer of the movie, Crazy Rich Asians?

The statutory board has also been marketing Singapore as a tourist destination to overseas audiences through various film-related initiatives, including a three-day event earlier this month in Los Angeles known as the Crazy Rich Singapore Week. The event introduced Singapore-themed cocktails, food, and art in hip L.A. rooftop bar The Highlight Room by Tao Group.

Ms Lynette Pang, STB's assistant chief executive, marketing group, told The Straits Times: "As the movie is set in Singapore and showcases Destination Singapore in a way that celebrates Singapore's culture, food and attractions, it is a natural opening to get the conversation going about the real Singapore and pique interest in visiting the country." 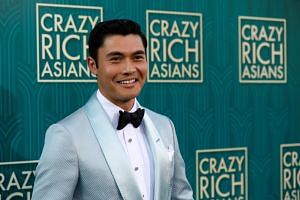 Crazy Rich Asians clocks in with a crazy opening weekend

She added: "Due to the large Singaporean cast and crew involved in the production, STB is also focusing our marketing message around our home-grown talents and personalities as they are a key anchor of our Passion Made Possible brand. The film shines a spotlight on them, and how they are making their passions possible on a global stage."

The SFC thus describes the movie as not just "made in Singapore" but "made with Singapore".

The film also makes history for being the Hollywood studio film with the most number of Singaporeans in the cast itself, with 12 home-grown names such as Pierre Png and Fiona Xie in the mix.

Mr Joachim Ng, director of the Singapore Film Commission, told The Straits Times: "Crazy Rich Asians is important for the local film industry, as it facilitates the exchange of skills and experience, and benefits local talent by providing them the opportunity to work with international talent and companies."

Other "made-with-Singapore" films in the past include Hollywood action thriller Hitman: Agent 47 (2015) starring Rupert Friend, and sci-fi flick Equals (2015) starring Kristen Stewart and Nicholas Hoult, which were also shot here and had employed Singapore crew members.

But both of them bombed at the box office and were largely forgotten after they were taken down from cinema screens.