LOS ANGELES (REUTERS) - Crazy Rich Asians may be the first Hollywood movie in 25 years with an all-Asian cast but the filmmakers hope it will be enjoyed by moviegoers of all backgrounds.

The romantic comedy about an Asian-American New Yorker who goes to Singapore to meet her boyfriend's wealthy and tradition-bound family of Chinese descent is based on the 2013 best-selling book of the same name by Kevin Kwan.

"It's been way too long since we had an all-star Asian cast in a Hollywood studio movie, but at the same time, this movie is for everyone," Kwan told Reuters at the red carpet premiere in Los Angeles on Tuesday (Aug 7).

"My books are read around the world in 20 languages, and in the US 80 per cent of my readers are Texan, Oklahoman, Kansas - like, white people - and they love my books. So it's a movie that everyone can enjoy and appreciate," he said.

The movie stars established actresses like Michelle Yeoh, from Crouching Tiger, Hidden Dragon, and Constance Wu from US television comedy Fresh Off The Boat, along with newer faces like New York rapper and actress Awkwafina and Henry Golding, who was raised in Britain.

Director Jon M. Chu said no single movie could represent all the Asian people in the world but he hoped the plot and the array of actors in Crazy Rich Asians would show that "we're layered and complicated and not just the token computer guy or the sex kitten."

"All these things just help get people more information about who we are as a people and help differentiate that we're not just one blob being Asian," Chu said. 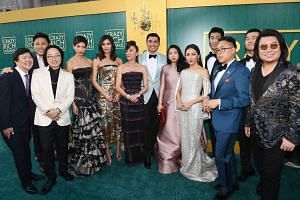 The last Hollywood studio film featuring a large Asian cast was The Joy Luck Club in 1993.

Crazy Rich Asians starts its worldwide roll out on Aug 15.