SINGAPORE — Firms may no longer need to approach government agencies separately on specific grants, and can instead look to a single point of contact for support on their business plans, said Trade and Industry Minister Chan Chun Sing on Wednesday (Aug 21).

Rather than telling agencies which schemes they are trying to adopt, companies could come with a business transformation plan, said Mr Chan, adding that agencies will then help to sort out the “back-end”.

“We are going to make our help schemes company-centric, not scheme-centric,” he said at a Singapore Chinese Chamber of Commerce and Industry (SCCCI) conference.

He noted that the authorities are tweaking the way that they will support firms, especially small and medium-sized enterprises.

It is also one way that the Government is helping companies grow their topline, with more Singapore businesses now expecting a drop in their revenue and profit margin as the economy slows and the United States-China trade war continues.

Close to 40 per cent of more than 970 firms polled by the SCCCI in its annual business survey this year expected a fall in revenue, up from around 27 per cent last year, revealed the group’s president Roland Ng at its annual SME Conference where Mr Chan spoke.

Of those surveyed, 95 per cent were SMEs.

About 70 per cent of the firms said they were facing the challenge of rising business costs as well, while around 55 per cent forecast a dip in profits this year.

The survey reflects the effects from the slowing down in Singapore's economy, said Mr Ng at the event at Suntec Singapore. The two-day conference is expected to see 7,000 attendees. 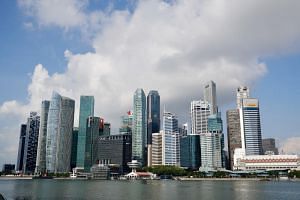 S'pore beats expectations to attract $8.1b investment commitments in first half of 2019

NDR 2019: S'pore's economic growth has slowed but stimulus measures not required yet

Earlier this month, Singapore slashed its full-year growth forecast to between 0 per cent and 1 per cent, down from a previous range of 1.5 per cent to 2.5 per cent.

Growth in the second quarter came in at just 0.1 per cent from a year ago as well, fuelling concerns over a possible technical recession - or two consecutive quarters of negative quarter-on-quarter growth.

Mr Ng added that, fortunately, most of the businesses polled are committed to retaining their present employees, noting that 60 per cent indicated they would do so.

About 17 per cent, however, said they would cut back on manpower.

"In such a business environment, the topmost concerns of the respondents are how to grow their revenue, innovation of products and services, attraction and retention of workers, and how to digitalise their businesses," he said.

He also noted that most businesses are concerned with trade tensions between the US and China, followed by cyber attacks and the bilateral relationship of Singapore and Malaysia.

The ongoing trade war is a reminder of the "utmost importance of acquiring technology to build up competitiveness", Mr Ng added.

Smaller companies for example, can embrace digitalisation to transform themselves, making use of artificial intelligence and the Internet of Things to boost operational efficiency.

He urged firms venturing abroad to be more agile amid a challenging global economic environment where protectionism is on the rise, saying they can also diversify their internationalisation strategy or collaborate instead of going it alone.

Mr Chan noted as well that companies need to be cognisant of long-term shifts and prepare themselves beyond the fallout from the US-China conflict.

This can be done by diversifying their markets and embracing digital solutions which can help them transcend geography.