SINGAPORE - Securities Investors Association (Singapore) chief David Gerald, in his latest media statement on the debt-ridden Hyflux, attempted to correct some erroneous views of investors of the water treatment company, as he pointed out that current investigations, if any, would not be aborted just because investors vote in favour for restructuring on Friday (April 5).

Mr Gerald, who has written several open letters and opinion pieces lately on the drama unfolding at the former market darling Hyflux, sent another letter to The Business Times on Monday.

He noted that some Hyflux investors are of the view that investigations against the board and management of the company would stop, and that would absolve them of responsibility, if its restructuring scheme gets the nod from investors.

"Sias is advised that this view is not correct. If there is any investigation, currently, it will continue and it need not put the company in liquidation for the investigation to take place," Mr Gerald wrote.

According to the investors' rights advocacy group, the restructuring scheme only discharges the company, but not the directors, the management, auditors or arrangers of the instruments sold to Hyflux investors.

"There is nothing to stop the creditors from calling for an investigation by the authorities or even by the new board of directors to look at what the old board did."

Mr Gerald also reminded investors that the Government has already made it clear that it would not bail out Hyflux, even if the restructuring scheme is voted down on Friday. The government would, instead, acquire the water desalination plant at Tuaspring at zero dollars. 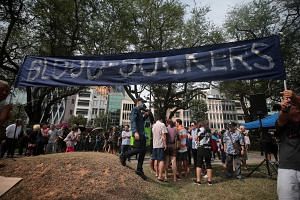 In urging all investors to turn up to vote, Mr Gerald pointed out that the offer from Salim Group is the only deal on the table, and investors could possibly recoup their losses only if Hyflux does not go into liquidation - the other outcome if restructuring is not supported by investors.

He said: "It would be a shame should liquidation take place, to see thousands of Singaporean employees of Hyflux losing their jobs."