SEMENYIH - Selangor voters were queueing up patiently at polling booths in the state constituency of Semenyih on Saturday (March 2), with the opposition Barisan Nasional coalition saying it was confident of wresting the seat from the ruling Pakatan Harapan (PH) alliance.

Voter turnout was 63 per cent at 3pm, according to data from the Election Commission. Polling stations will close at 5.30pm.

The official result of the by-election is expected a around 9pm.

The by-election was called following the death of the assemblyman for Semenyih who was from Parti Pribumi Bersatu Malaysia (PPBM), one of the four parties under the PH pact.

Malays comprise 69 per cent of the electorate, with the main town of Semenyih being home to Britain's University of Nottingham Malaysia campus, and the Broga Hill popular among hikers.

Located some 30km south-east of the capital Kuala Lumpur, the area has undergone rapid growth over the past decade, and continues to see large-scale development, with more homes, international schools and shopping malls being built.

Former Malaysian prime minister Najib Razak, who campaigned hard in the by-election, said he is confident of a victory for the Umno candidate that represents BN. 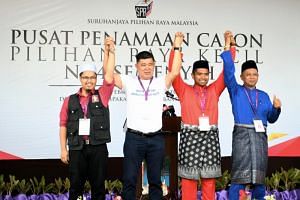 He said he will hide under a table should PH retain the seat. He has also promised to bring his wife Rosmah Mansor to visit Semenyih should BN won.

Prime Minister Mahathir Mohamad, who leads PPBM, has also been campaigning for his party's candidate during the 14-day campaigning period.

Five by-elections had been conducted since PH took federal power in the May general elections last year.

PH retained four of these seats (three in Selangor and the other in Port Dickson, where PKR leader Anwar Ibrahim staged his political comeback), and BN held on to the Cameron Highlands seat in a by-election in January.

So a PH loss in Semenyih would be the first time that a ward flipped to the other side since the May polls, which would be a big blow to Tun Mahathir's alliance that has been struggling with winning the hearts of Malay voters.

In the May polls, PH/PPBM’s Mr Bakhtiar Mohd Nor, who died in January, won the seat with 23,428 votes.

There are four candidates in this by-election, with PAS staying out of the contest and has thrown its support for BN.

PH is represented by  newcomer Muhammad Aiman Zainali, 30, and BN by 58-year-old Mr Zakaria Hanafi, permanent chairman of an Umno branch in the Semenyih ward.

Voter turnout for the ward in the May general election was 87.9 per cent.