KUALA LUMPUR - Increasing unhappiness among Malay voters over the ruling Pakatan Harapan's performance could play a crucial role in an upcoming by-election in the Malay-majority seat of Semenyih in March, where a victory for Prime Minister Mahathir Mohamad's party may help turn the tide and boost confidence in his coalition.

Malays comprise 69 per cent of the electorate in the quiet Selangor town of Semenyih, which is home to Britain's University of Nottingham Malaysia campus, and the Broga hill popular among hikers.

Located 20km south of the capital Kuala Lumpur, the area has undergone rapid growth over the last decade, and continues to see large-scale development with more homes, international schools and malls being built.

With a recent survey published on Jan 31 by pollster Ilham Centre and Penang Institute showing rising discontent among Malays over how the PH administration is handling Malay issues and Islam, the by-election will test whether or not Tun Dr Mahathir's Parti Pribumi Bersatu Malaysia still has clout among Malays and can retain the state seat.

Almost 55 per cent of those surveyed felt that PH is ignoring Malay Muslim rights, and this may cost PH dearly.

Campaigning only officially begins on Saturday (Feb 16), but PH and its closest rival Barisan Nasional (BN) have already been working the ground.

Former premier Najib Razak was mobbed by fans, mainly Malays, when he visited a Tesco hypermarket in Semenyih on Wednesday. 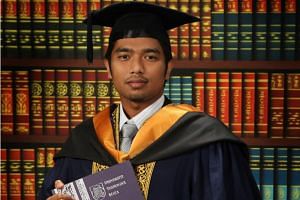 The former president of Umno, which leads the BN pact, seems to be enjoying newfound popularity despite facing dozens of charges linked to graft and financial fraud, after swapping his suit for a hoodie and attempting to win over working-class Malays with his slogan "Malu apa, bossku?" which means "Why the shame, boss?"

Najib appears to have thousands of Facebook followers, many of whom complain about the cost of living and say they regret voting for PH in the May general election which the Najib-led BN administration lost.

Many Malays also believe that the Chinese-dominated Democratic Action Party is controlling the government, as one of the four parties within the PH coalition. The other two parties in PH are Parti Keadilan Rakyat (PKR) and Parti Amanah Negara.

Although PH has won four by-elections since May - three in Selangor and the other in Port Dickson where PKR leader Anwar Ibrahim staged his political comeback - it lost the last by-election held in Cameron Highlands in January, to the incumbent BN candidate who won with a 3,238-vote majority.

It will not bode well for PH if it loses the Semenyih seat, located in its stronghold state of Selangor.

The Selangor government think-tank Institut Darul Ehsan (IDE) has predicted that PH will win in Semenyih although it found that 46 per cent of Malay voters there were dissatisfied with the state government.

IDE deputy chairman Mohammad Redzuan Othman said a survey it ran between Jan 30 and Feb 1 found that PH would retain 46 per cent of the vote in the by-election, while BN may get 37 per cent.

Still, BN could gain the edge now that it has an informal pact with the conservative Parti Islam SeMalaysia (PAS) for PAS to stay out of the race, unlike in the May election when votes were mainly split three ways.

In the 2018 general election, PPBM's Bakthiar Mohd Nor won the seat with 23,428 votes, with BN's Johan Abdul Aziz garnering 14,464 votes and Mad Shahmidur Mat Kosim securing 6,966 votes for PAS. Assuming all PAS supporters decide to vote for the BN candidate, BN will only need to sway another 2,000 voters its way to win the by-election.

"PH is seen as having underperformed by both Malays and non-Malays and failing to fulfil promises made in their manifesto," said analyst Awang Azman Awang Pawi of Universiti Malaya. These unfulfilled pledges include to abolish toll charges and tackle the rising cost of living.

Mr Awang Azman estimates support for PH among Malay voters in Semenyih at 53 per cent, while support for BN and PAS hovers around 47 per cent.

Analyst Amir Fareed Rahim of KRA political consultancy noted that the stakes are higher for Dr Mahathir's PPBM than it is for Umno and PAS, as this is the first time the party is contesting in a by-election.

"A victory may help turn the tide for PPBM with regards to the Malay base and will help boost confidence in PH and its leaders among the wider electorates," said Mr Amir.