Returning officer Mohd Sayuthi Bakar announced at 10.25am on Saturday (Feb 16) that none of the four nomination papers were rejected.

Pakatan will defend the seat it won in the 14th General Election through 30-year-old Muhammad Aiman Zainali, who is the treasurer of Parti Pribumi Bersatu Malaysia's Hulu Langat division.

The mood at the nomination centre was very friendly, as rival party members were seen mingling with each other as they waited for the nomination process to be over.

The march towards the nomination centre was also a peaceful affair, as supporters gathered at designated locations as early as 8am. 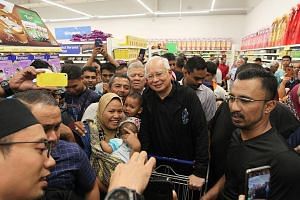 The Semenyih by-election was triggered due to the death of its incumbent Bakhtiar Mohd Nor from a heart attack on Jan 11.

The Semenyih polls is the sixth by-election post-GE14, and the second to be held in 2019 after Cameron Highlands.

It is also the fourth by-election for the Selangor state assembly, following Sungai Kandis (Aug 4), Balakong and Seri Setia (jointly held on Sept 8).

The Election Commission has set Feb 26 for early voting, while polling will be held on March 2.