The May 4 coronation of King Maha Vajiralongkorn and news days before about his new Queen Suthida mark the latest chapter in the nearly 240-year-old Chakri Dynasty.

Here is a brief look at key moments for Thailand's revered monarchy.

The ruling Chakri dynasty emerged in 1782.

That year, King Rama I established the new capital of Siam on the banks of the Chao Praya river. It was the beginnings of modern-day Bangkok.

King Chulalongkorn, or Rama V, took power in 1868. Seen as a reformer, he modernised the economy and civil service, sending his children abroad for education. 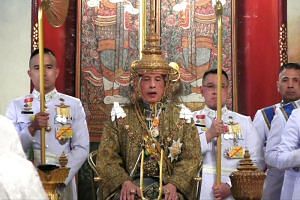 One of his sons, a prince, fell in love with a commoner. In December 1927, she gave birth to future ruler Bhumibol Adulyadej in Cambridge, Massachusetts.

On June 24, 1932, King Prajadhipok fell in a bloodless coup. A constitutional monarchy was introduced by reformers in the government and military.

In 1935, Bhumibol's older brother, Ananda Mahidol, was crowned king of Thailand after his uncle Prajadhipok abdicated.

On June 9, 1946, 18-year-old Bhumibol Adulyadej assumed the throne after Ananda died in a mysterious shooting in his Grand Palace bedroom.

Royalists brought back rituals and customs reinforcing the monarchy's role in Thai society.

King Bhumibol married Queen Sirikit on April 28, 1950, a week before his coronation.

The king and queen had four children. Their only son is now King Vajiralongkorn.

Thailand was considered a key US ally in the fight against communism as it spread through South-east Asia.

In the 1960s and 1970s, the US flew bombing sorties from bases in the country. Thai troops known as the Queen's Cobras join the fight in Vietnam. 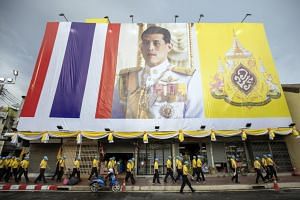 Thailand fought a simmering communist insurgency at home at a time when monarchs were ousted by left-wing forces in Cambodia and Laos.

In October 1973, scores were killed when a military dictatorship cracked down on pro-democracy protests.

King Bhumibol asked the prime minister to leave the country and later appointed a new premier, leading to a brief flowering of democracy.

The same year, 1976, the penalty for breaching Thailand's royal insult law was toughened to 15 years.

In 1992, hundreds of thousands of pro-democracy protesters filled the streets of Bangkok demanding a return to civilian rule. Dozens were killed by the army in what is later known as "Black May".

In a dramatic televised broadcast, the King admonished the two leaders from each side at the palace and told them to reconcile, cementing his mythic status as a unifying force.

In 2006, a bloodless coup ousted billionaire and populist prime minister Thaksin Shinawatra while he was at the UN. 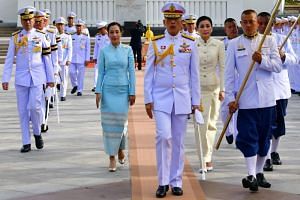 The coup sparked years of protests in a country split between Thaksin's supporters - many of whom are in the rural north - and his foes among the Bangkok-based elite in the palace, military and bureaucracy.

In August 2009, the king made a rare speech warning that the country could collapse if feuding factions do not unite.

Thailand's junta seized power in 2014 and toppled the administration of Thaksin's sister Yingluck after months of violent street protests.

In September 2016, the palace announced the king has received treatment for a "severe" blood infection. King Bhumibol died the next month and Thailand was plunged into mourning.

In early 2019, a party linked to Thaksin put forward King Vajiralongkorn's older sister as its prime ministerial candidate, a shock move in a country where the monarchy is nominally above politics.

Days before King Vajiralongkorn's May 4 coronation, the palace announced he has married Suthida Vajiralongkorn na Ayutthaya, a former flight attendant who joined his royal guard.

She is invested as Queen during the first day of the ceremony.