A Thai princess was nominated as a candidate for prime minister in the March 24 elections, for a party linked to the Shinawatra political clan.

The 67-year-old Ubolratana Rajakanya, the elder sister of King Maha Vajiralongkorn, was nominated by the Thai Raksa Chart Party. Her nomination breaks the long-standing tradition of Thai royalty staying out of politics.

The king later issued a rare statement opposing the move, saying it was “inappropriate” for members of the royal family to enter politics.

Here are five things to know about the princess.

1. SHE GAVE UP HER ROYAL TITLE FOR LOVE

She relinquished her royal title on July 25, 1972, when she married American Peter Jensen, who she met while studying at Massachusetts Institute of Technology (MIT).

She studied mathematics and bio-chemistry at MIT and earned a master's degree in public health from the University of California in Los Angeles, reported Reuters.

She's one of several royals to famously give up their title for love - from Britain's King Edward, who abdicated to marry American Wallis Simpson in 1936, to Japan's Princess Mako, who has announced her intention to give up her royal title to marry Mr Kei Komuro, a lawyer. 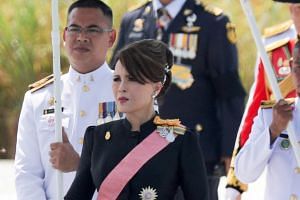 Ms Ubolratana lived in the United States for 26 years until 1998, when she divorced Mr Jensen and returned to Thailand.

She and Mr Jensen have three children: Khun Ploypailin Mahidol Jensen, Khun Bhumi Jensen - her son who died in the 2004 Indian Ocean tsunami at the age of 21 - and Khun Sirikitiya Mai Jensen.

When she permanently returned to Thailand, she was bestowed the title "Tunkramom Ying" which means "Daughter to the Queen Regent". She is treated by officials as a member of the royal family.

2. SHE IS ACTIVELY INVOLVED IN CHARITY WORK

She chairs four non-profit foundations championing anti-drug campaigns, support for autism and the poor, as well as other charitable foundations, according to the Thai Ministry of Culture. She also organises youth concerts.

To Be Number One, a philanthropy campaign and anti-drug foundation she founded in 2002, aims to help young people stay away from drugs, reported Reuters.

In a speech to mark her father's birthday in 2017, she said: "In everything we do, we must devote our heart, our knowledge, every part of ourselves... Working with youth and with drugs, there are so many complexities behind it, but we have to work hard to help."

3. SHE HAS STARRED IN TV DRAMAS AND FILMS

Unlike her other royal siblings, she has a significant presence in mainstream media.

Her first foray into television drama was in 2003, reported news site Khaosod English. She appeared in the TV series Kshatriya as well as in Great King Saves The Land. Three years later, she starred in the series Anantalai.

She also starred in Thai films including Where The Miracle Happens (2008) - which was based on her book The Short Story Of Mine - and My Best Bodyguard (2011).

Where the Miracle Happens

She told The New Paper in 2008 that she refused a stunt double while filming a scene showing a burning school house for Where The Miracle Happens.

A long-time ambassador of the Thai film industry, she is often seen at film premieres and festivals such as Cannes.

The princess is also a singer, and performed the theme song for her To Be Number One foundation.

She hosts the To Be Number One Variety talk show by her foundation and the Mental Health Department. The show airs on Saturday nights on state broadcaster NBT. Ms Ubolratana gives advice to young people on the show, reported Khaosod.

She chose Singapore as the first country in Asia to launch her first movie in 2008.

She told The Straits Times it was because "Singapore is very close to our country and it is a modern city which is moving forward very rapidly".

"As my work is centred on young people and helping the less privileged, I want to start with Singapore, which has a young population and people who are young at heart."

5. SHE IS AN AVID SOCIAL MEDIA USER

The royal is an avid social media user who has close to 100,000 followers on her personal Instagram page, using the handle @Nichax. The account has now been set to private.

She periodically posts videos of herself singing and dancing during the Christmas holidays.

She also recently posted videos of herself eating street food and another complaining about pollution in Bangkok, reported Reuters.