HANOI (AFP) - Vietnamese young and old expressed their delight on Wednesday (Feb 6) after hearing their country had been chosen for the second face-to-face meeting between US President Donald Trump and North Korean leader Kim Jong Un.

The communist-run South-east Asian country was announced during Mr Trump's State of the Union address as the location for the high-profile summit due to take place later this month.

It follows the pair's historic handshake and brief declaration on denuclearisation at their inaugural meeting in Singapore in June last year.

The pick brings prestige to the former US foe-turned-ally and is symbolic for Vietnamese of a certain generation, who welcomed the move.

"Our country now has a new position and the world trusts us," Mr Pham Van Thau, an 82-year-old communist party member, told AFP in Hanoi.

"The summit will help the world understand more about Vietnam."

The precise location for the summit - to be held on Feb 27 and 28 - has not been announced, though both the capital Hanoi and beach resort town Danang have been rumoured. 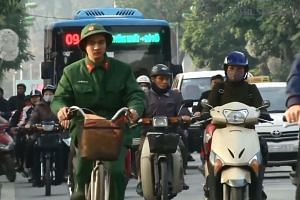 From Twitter hate to second date: Trump and Kim in quotes

"We have a chance... to show everyone that Vietnam is a beautiful country and that the Vietnamese are friendly," she said.

Analysts say the trip, which is set to be Mr Kim's first to Vietnam, could offer the North Korean leader a model of post-war economic transformation under a communist state with capitalist leanings.

Ms Nhung agreed: "I think North Korea now is like Vietnam before the US embargo was lifted, poor and economically limited."

On Facebook and other social media platforms, users beamed with pride at the prospect of the summit.

Commenters on one site said Mr Kim could even take inspiration from the country's north and south reunifying after the war.

"They meet in Vietnam so that Kim can see how the two parts of a country will look like after reunification," Mr Gia Hoang commented on otofun.net.

Vietnam is looking to follow up on its successful hosting of the Asia Pacific Economic Cooperation (Apec) summit in 2017 and the regional World Economic Forum last year - boosting its diplomatic gravitas on the global stage.