BANGKOK (AFP, THE NATION/ASIA NEWS NETWORK) - A Thai political party will obey a command from the king blocking the candidacy of former princess Ubolratana Rajakanya Sirivadhana Barnavadi for prime minister, it said in a statement on Saturday (Feb 9), in a dramatic reversal only a day after putting her forward for the position.

"Thai Raksa Chart party complies with the royal command with loyalty to the king and all members of the royal family," it said in a message to reporters.

The statement added that the party, a populist party loyal to ousted former premiers Thaksin Shinawatra and Yingluck Shinawatra, appreciated the former princess's kindness to the party.

"The Thai Raksa Chart will carry out its duty in accordance with the regulations of the Election Commission, the election law and the Constitution with respect to the tradition related to the monarchy. And it is ready to implement its policies to bring about developments and prosperity to Thailand with respect to decisions of the people in accordance with the democratic system with the King serving as the head of the state," the statement concluded.

The announcement effectively invalidates Ms Ubolratana’s unprecedented bid for prime minister in March elections and comes after an extraordinary rebuke of her candidacy by her younger brother, Thai King Maha Vajiralongkorn.

Thai Raksa Chart announced the former princess as their candidate on Friday morning in a move that looked to rattle the status quo and threaten the ambitions of the junta that has ruled Thailand since it toppled the administration of Yingluck Shinawatra in a 2014 coup.

But King Vajiralongkorn, 66, torpedoed the bid in a sharply worded Royal Command later the same day that said bringing senior royal family members into politics is against tradition, national culture and “highly inappropriate”. 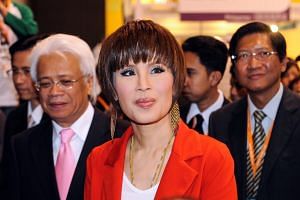 The King did not criticise the former princess directly and seemed to focus blame on political party members who brought her on board.

Separately on Saturday, the leader of the pro-military People's Reform Party stepped up pressure on the Election Commission (EC) to dissolve Thai Raksa Chart for nominating Ms Ubolratana as its prime ministerial candidate, Bangkok Post reported.

Mr Paiboon Nititawan said under the 2018 Political Party Act, the EC must propose to the Constitution Court the dissolution of a political party that has committed an act deemed hostile to the constitutional monarchy rule. He called on the EC to hold an urgent meeting to consider the party's dissolution on Monday.

"The EC must therefore take steps to dissolve the party. As for myself, I don't need to do anything because the royal announcement is very clear and people understand it," said Mr Paiboon. The Election Commission had earlier said it would meet at 10am on Monday but did not specify the meeting's agenda.

Mr Prapan Naikowit, a former EC member, was reported as saying the EC had to consider whether Thai Raksa Chart's move was serious and warranted its being referred to the Constitution Court for dissolution.

Thailand has some of the most severe lese majeste laws in the world and the King’s word is considered final.

Royalist Thais and celebrities praised the intervention on social media after the order, writing “long live the king”.

Others expressed unhappiness with groups like Thai Raksa Chart.

An activist who called himself Champ 1984 said he was “disappointed” with the idea of a pro-democracy party enlisting a royal family member and would now vote for a different party.

Analysts had already forewarned that the palace statement had scuttled the former princess’s chances.

The Thai Raksa Chart Party's head office, which is normally bustling with red-shirt leaders, was almost deserted on Saturday.

Party leader Preechapol Pongpanich and other executives did not show up at the office as usual in the morning. Reporters monitoring the office on Chaeng Wattana Road saw only five ordinary members and party supporters outside the premises.

The party also cancelled a planned event on Saturday in Bangkok featuring Preechapol. The princess had not been scheduled to appear at that event.

Thailand is a constitutional monarchy and has not had a royal run for front-line office since 1932.

The 67-year-old former princess did not address the royal rebuke head-on on Saturday morning, when she thanked supporters on her widely followed Instagram account and said vaguely that she wanted Thailand to “move forward”.

Junta chief Prayut Chan-o-cha, the leader of the coup that toppled the administration of Yingluck Shinawatra in 2014, also said he would stand for the top post on Friday.

Ms Ubolratana’s move briefly threw his fortunes into disarray but the palace action made it clear it does not endorse her run.

Thai Raksa Chart is aligned with Yingluck and her brother Thaksin, who was ousted by the army in 2006. Analysts had assumed Thaksin and the party would not make such a move without royal approval.