Twin shock waves shook up the political arena in Thailand yesterday, the first after the King's elder sister was nominated as a prime ministerial candidate ahead of the country's first election in eight years.

And the second, more than 12 hours later, when King Maha Vajiralongkorn came out to denounce it.

Former princess Ubolratana Rajakanya, 67, was the sole candidate put forward by the Thai Raksa Chart Party yesterday under a new electoral system that requires parties eyeing the premiership to name their candidates in advance.

Thai Raksa Chart is linked to Thaksin Shinawatra, the ousted former prime minister who is now a fugitive and living in exile after being convicted of conflict of interest.

The party is led by many former members of the Pheu Thai Party, which won the last election in 2011 but lost power following a military coup in 2014. Thai Raksa Chart is allied to the Pheu Thai, which is also linked to Thaksin, for the forthcoming March 24 elections.

In a palace statement read out on all Thai TV networks, the King said: "Even though she has relinquished her royal titles in writing, she maintained her status and carried herself as a member of the Chakri dynasty. Involvement of a high-ranking member of the royal family in politics, in whatever way, is considered an act that defies the nation's traditions, customs and culture, and therefore is considered extremely inappropriate."

The eldest child of the late King Bhumibol Adulyadej, then Princess Ubolratana relinquished her royal title at the age of 21 to marry a fellow student at the Massachusetts Institute of Technology. 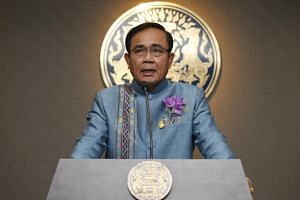 After the couple divorced in 1998, she returned to Thailand, where she continues to be treated as a royal.

Her activities are chronicled alongside those of her three siblings - including King Maha Vajiralongkorn - in regular television news bulletins on the royal family.

Her decision to enter the po-litical arena was unprecedented in modern Thai history. No per-son so close to the inner circle in the palace has been so directly involved in politics since Thai-land abolished absolute monarchy in 1932.

The sudden development had triggered expectations of a political deal and raised hopes of reconciliation in a country racked by bitter political rivalry between royalist, pro-military factions and Thaksin-linked groups for more than a decade.

In statement posted on her Instagram account earlier yesterday, Ms Ubolratana had thanked the Thai people for their support.

"I want to see all of us have the opportunity to build happiness in our country.

"I would also like to clarify that I have given up all royal titles, and I am living as a commoner. Therefore, I would like to exercise my rights and freedom as a commoner under the Constitution, and I consent to Thai Raksa Chart Party's nomination as prime minister."

Meanwhile, current Prime Minister Prayut Chan-o-cha yesterday announced that he had accepted the nomination of the Palang Pracharath Party to be its candidate for the country's top office. Mr Prayut said: "This decision is not easy because it comes at an important point for the country. I may be a soldier, but also love and am always ready to sacrifice my life for this country.

"I am determined to work with the people to move the country ahead to bring peace and reconciliation."

The King's statement last night, stressing that the monarch and royal family members should be above politics, appears to have put an end to his sister's political aspirations.