BANGKOK (BLOOMBERG) -  Opponents of Thailand’s exiled former leader Thaksin Shinawatra are rushing to disband a party made up of his allies, a tactic that in the past led to deadly street clashes.

The Constitutional Court on Thursday (Feb 14) accepted a case calling for the party, Thai Raksa Chart, to be dissolved for hostility towards the constitutional monarchy.

Thaksin-linked parties have previously been broken up during the former leader's more than decade-long tussle for power with the military and royalist elite. While his allies usually regroup under a new banner, the cycle of political instability is a challenge for efforts to make the Thai economy grow more quickly.

"If parties linked to Thaksin keep being disbanded, the conflict will never end, and will intensify," said Dr Punchada Sirivunnabood, an assistant professor at Mahidol University's Faculty of Social Sciences and Humanities near Bangkok.

Disbanding Thai Raksa Chart could anger Thaksin's supporters and boost junta leader Prayut Chan-o-cha's push to stay as premier after the general election due on March 24. 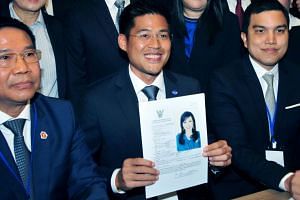 Thai princess apologises after being disqualified from PM run

What's next for Thai Raksa Chart and Thaksin?

Thai Raksa Chart saw its bid to make Princess Ubolratana Rajakanya its candidate rapidly unravel last Friday when the king issued a royal command saying the monarchy is above politics and the spirit of the Constitution prevents top royals from holding political office.

"It's likely that the court will dissolve the party," said Dr Paul Chambers, a lecturer at Naresuan University's College of Asean Community Studies.

Thai Raksa Chart's leader Preechaphol Pongpanit said on Wednesday that the party has acted with the best of intentions and is innocent, after the Election Commission recommended its dissolution.

The Constitutional Court - whose judges are appointed by the monarch - dissolved Thaksin's Thai Rak Thai party in 2007 and did the same to its reincarnation, the People Power Party, the following year. Top party leaders were banned from politics for five years.

The moves helped trigger massive street protests from Thaksin's supporters in 2009 and 2010 that paralysed central Bangkok for weeks and left about 100 people dead.

Thaksin or his allies have won every election since 2001, only to be unseated by the courts or the military. Thaksin hasn't set foot in Thailand since 2008 after being accused of corruption.

But he is thought to retain a loyal following among the rural poor, and another party linked to him, Pheu Thai, is the main opposition to the ruling junta. Thai Raksa Chart was relaunched last year partly to take advantage of an electoral system that favours smaller parties.

Pheu Thai is seeking to woo voters with a plan to revive economic growth, and has said it is "going forward in full gear" ahead of the election.