Ms Ursula Mueller, a UN assistant secretary-general for humanitarian affairs, said the authorities had turned down her requests to meet those displaced by the conflict in a region barred to most aid groups since the fighting broke out.

"We need access - predictable, sustained access - to reach the people in need," Ms Mueller told Reuters late on Tuesday (May 14), at the end of a six-day visit to the South-east Asian nation.

"If the assistance, including mobile clinics, cannot get to the people, they just don't have the services and their needs are not being met and some people are dying."

Reuters could not immediately reach a government spokesman to seek comment.

Rakhine has been in the global spotlight since 2017, after roughly 730,000 Rohingya Muslims fleeing a military crackdown in response to militant attacks crossed into neighbouring Bangladesh.

UN investigators have called for senior military officers to be prosecuted over allegations of mass killings, gang rapes and arson. The military denies widespread wrongdoing.

More recently, civilians have been caught up in clashes between the military and the Arakan Army, an insurgent group that recruits from the mainly Buddhist ethnic Rakhine population and is fighting for greater autonomy for the state. 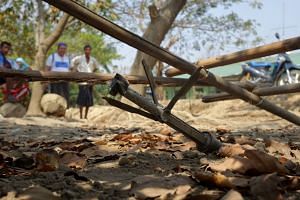 During her visit, Ms Mueller met senior officials in the capital, Naypyitaw, including state counselor Aung San Suu Kyi who said she was working towards "development and social cohesion" in Rakhine.

"I was pointing out the humanitarian needs that are existing that need to be urgently met," she added.

Ms Mueller also visited camps outside Sittwe, the state's capital, where thousands of Rohingya have been confined since a previous bout of violence in 2012. Most lack citizenship and face curbs on movement and access to basic services.

Myanmar has been working with the UN on a strategy to close the camps, but it amounts to building new, more permanent homes in the same place rather than letting people return to areas from which they fled, Reuters reported last year.

Ms Mueller, who is also a deputy coordinator for emergency relief, said she had discussed the strategy with officials.

"It's not enough to erect buildings on the same site while the underlying causes are not addressed," she added. "People have no freedom of movement. They are losing hope after seven years in this camp."