YANGON (REUTERS) - Arakan Army rebels overran a police base in Rakhine state, killing two officers and one of their wives, the Myanmar government said on Wednesday (April 10), as fresh fighting broke out in a historic Buddhist temple town popular with tourists.

The Information Ministry said around 200 insurgents stormed a police headquarters in Mrauk U before being repelled, but that they abducted four women and three children as they left.

"According to information from the Myanmar police force, the AA (committed an act of) terrorism by attacking a family dormitory and taking unrelated family members like wives and children," the ministry said in a post on its website.

Arakan Army spokesman Khine Thu Kha said rebels had attacked a police outpost in Mrauk U - where clashes in March wounded six people - but denied they had killed or abducted any civilians.

He denied the site had any dormitory, saying rather that heavy weapons were stored there.

"They were shooting from that camp and so it affected the people. So the Rakhine army cleared that. There were many casualties on the Myanmar military side."

Rakhine came to global attention in 2017 when the Myanmar army drove about 730,000 ethnic Rohingya Muslims from the state across the border into neighbouring Bangladesh, following attacks by Rohingya insurgents on police posts. 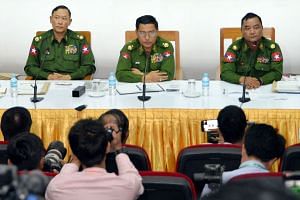 More recently, the military has been battling another armed rebel group, the Arakan Army, which draws recruits mostly from the ethnic Rakhine population, who are mainly Buddhists, and is fighting for greater autonomy for the western state.

Government warplanes began strikes on Mrauk U late on Tuesday night, according to two residents, who said a one-year-old child was hospitalised.

"I don't know whether they are fighting with AA or not," local monk Myo Oo Khaung Sayataw said on Wednesday as aircraft could be heard flying overhead.

"I saw them shooting from the planes. We don't dare to go out to the town. The planes are still flying."

A hotel owner in Mrauk U, who asked not to be named for fear of retribution, said his roof had been damaged by bullets fired from the air.

"I have never experienced this before. The business is not good anymore. We cannot expect guests to come because this is happening."